Dezeen Music Project: OK Go's music video for new single The Writing's On The Wall is filled with optical illusions and visual trickery.

All filmed in-camera and in a single shot, OK Go's new video sees the band lip-sync through a series of optical illusions and perspective tricks set up in a Brooklyn warehouse. 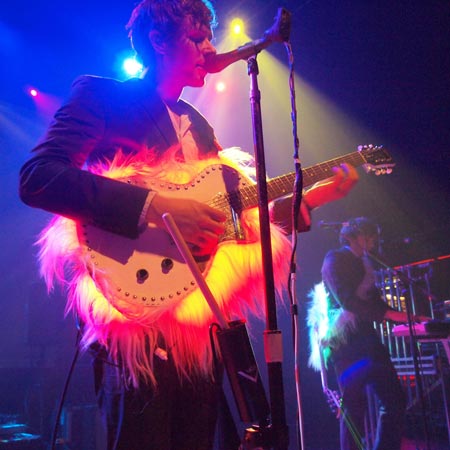 What appear to be solid objects are revealed to be cleverly painted two-dimensional shapes and faces emerge from piles of rubbish as the camera swings around and changes angles.

Guitarist Andy Ross cycles upside down at one point in the video, while paint dribbles horizontally across drummer Dan Konopka's face at another.

Directed by Aaron Duffy, Damian Kulash and Bob Partington, the video took a month to set up and needed over 60 takes before the band got it right.

"It was packed with all-nighters," Duffy told Dezeen. "There were only a very select few takes in which we got through the whole sequence. The band were incredible – we gave them a near-impossible obstacle course to get through. We finally felt that we got it at 3am on our last day."

The concept for the video was inspired by the lyrics of the song, which is about the end of a long-term relationship.

"The break-up theme of the song was a conceptual inspiration because relationships can be their own kind of illusion," Duffy explained. "The video became a metaphor for how people may or may not understand each other."

OK Go have an excellent track record with their music videos. Their video for This Too Shall Pass, which features a giant Rube Goldberg machine, has been viewed over 40 million times on YouTube.

Duffy revealed the band's past success weighed heavily on the creative team's shoulders when they were making the video.

"It was a huge amount of pressure," he said. "We did not want to be the ones to stop that winning streak. But we had a good feeling about it the whole time. People will have their own favourite OK Go video – we just wanted to push it as hard as we could."