The backdrop for OK Go's latest music video is formed from a wall of printers, which were each choreographed to produce hundreds of sheets of colourful paper.

The video for the Los Angeles-based band's new track was directed by lead singer Damian Kulash and Japanese artist Yusuke Tanaka, who wanted to create a visual representation of the song's title.

"This song is about how our most intense and complicated emotions are also our simplest and most universal," said Kulash.

"Obsession is so overwhelming and perplexing, but it's also so binary and basic — everything's normal and then suddenly it's not," he continued.

When paper manufacturer Double A approached the band to collaborate, Kulash and Tanaka pitched the idea of creating a "whole universe" made of paper.

"For the video, we wanted that same idea: take the simplest thing and just revel in how powerful and not-simple it really is. And animation is that — it's just one picture on one piece of paper, then another, and then another, and somehow that progression turns into a whole universe," Kulash said.

"So we tried to create the physical version of that universe, a room where the walls can change into anything you imagine, but everything is made of just one piece of paper following the last," he continued.

The video for Obsession was choreographed and filmed over the course of two years in Japan, using 567 printers and several hundred pieces of paper.

The film begins by explaining how all the paper used was recycled, and proceeds given to environmental charity Greenpeace.

The video then cuts to Kulash singing against a monochrome backdrop of black printers, which spit out white paper to form geometric patterns behind him.

The printers continue to produce more complicated, coloured patterns until at one point, the band begin interacting with printed versions of themselves.

The band members then perform synchronised movements in the air, before being placed back on the ground.

Kulash has previously co-directed all of the band's well-known videos, including Upside Down & Inside Out – where the band perform in zero gravity – and I Won't Let You Down, The One Moment – where a series of digital triggers set off several hundred events over the course of 4.2 seconds. 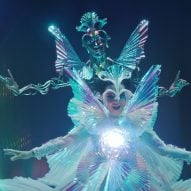