Called A Clockwork Jerusalem, the British pavilion charts the rise of innovative public housing and planning projects in the UK throughout the twentieth century, encompassing the New Towns created by British planners after the Second World War and huge housing developments erected in places such as Hulme in Manchester and Thamesmead in London.

"The ambition that we have for the British pavilion is twofold," Jacob says. "One is to tell an historical story - to describe what happened and why. But it's also a call to arms for contemporary British architecture, for it to reengage with the imaginative visions and the entrepreneurial spirit of actually being able to effect change." 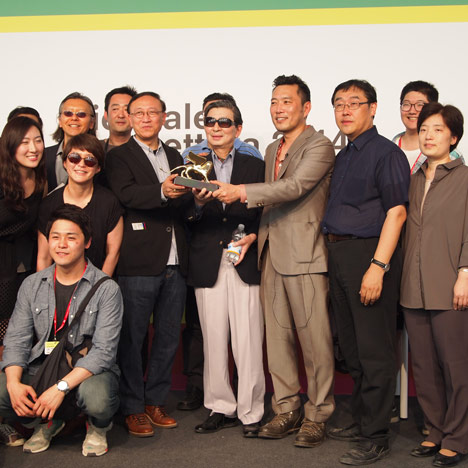 The central installation in the exhibition is a large mound of earth, which visitors can climb via two sets of fluorescent pink stairs. Jacob says the exhibit is intended to evoke an early public housing scheme, London's Boundary Estate, which was completed in 1900.

"The Boundary Estate is one of the first social housing projects in Britain, if not the world," Jacob says. "The ruins of the slum before were piled up to create the park in the centre of this new reformist development."

He continues: "It's a provocation, it's a question back to British architecture: is there a way we can revive the kind of thinking of the last century of really inventive, imaginative architecture and planning?"

"We look at the formal product of this period of architecture and planning, which are really incredible megastructures - things of incredible scale, but also incredible complexity," Jacob explains. "We have a model of the Hulme estate, which was the largest public housing project in Europe built in the early 70s in Manchester."

Jacob chose to represent Thamesmead largely through the lens of pop culture.

"We show Thamesmead through the eye of Stanley Kubrick with location scouting shots from A Clockwork Orange," he says. "We show the visual appreciation of a filmmaker of the work of local authority architects."

The exhibition also features a diverse selection of artefacts from Arts and Crafts wallpaper to contemporary crockery.

"We tried to make links that jump across categories and eras," Jacob says. "We show a piece of William Morris's willow-patterned wallpaper, but we also show a much later example of the decorative: the Trellick Tower-patterned plates and mugs by People Will Always Need Plates."

Jacob believes that, recalling some of the principles of the Arts and Crafts movement, there is a social message embodied in the use of iconic social housing projects as decoration.

"I think there's a hope embodied in these nostalgic products," he says. "Once we could plan, once we could imagine that architecture and planning could be part of making a new world."