Galerie Philia has unveiled Héritages, an exhibition at the Le Corbusier-designed Cité Radieuse building featuring work by designers such as Rick Owens that respond to the Swiss-French architect's theories of modernism.

Héritages presents work by eight international designers and seven visual artists that reference the modernist theories pioneered by Le Corbusier, whose designs are known for their functionality and minimalism.

Galerie Philia joined forces with the Parisian arts magazine Eclipse to curate the exhibition at Le Corbusier's iconic Cité Radieuse building in Marseille, which includes a range of both design and art.

Spread across two rooms in an apartment, the exhibited designers respond to the theme of "resonances" with work that is heavily influenced by Le Corbusier's theories, while the artists are guided by the theme of "dissonances" and present work that opposes the theories.

In the first room, a brutalist yellow chair by Italian designer Pietro Franceschini is displayed alongside other work, including a geometric bronze candlestick crafted with clean lines by Californian fashion designer Owens.

"Le Corbusier's theory, especially in his writings published in the 1920s, was provocative and militant both in his refusal of decoration without functionality, his industrial-inspired aesthetic, and his clear and marked difference between fine arts and design."

Also featured in this space are pieces such as a chunky daybed by Belgian designer Arno Declercq crafted from patinated and raw steel with sheep's wool. 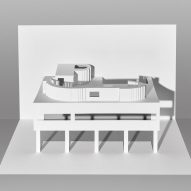 "Le Corbusier's theory almost denies a particular relationship with nature," Temnouche told Dezeen. "My paintings show the inertia of the plant, diminished under the influence of humans."

"I was inspired by the idea of this meager relationship that persists despite everything in Le Corbusier's work and theories."

Other works in this room range from an eclectic table by visual artist Jojo Corväiá crafted from volcanic clay and an ethereal, blown-glass light sculpture by Jérôme Pereira.

"All of the works in one way or another are an answer to Le Corbusier's theoretical and aesthetic heritage, either as a mark of resistance or a touching homage to his legacy," concluded Attali.

Galerie Philia is an international contemporary design and art gallery with locations in Geneva, New York City and Singapore.

Previous Galerie Philia exhibitions include a show that presented Latin American and European sculptural design and an exhibition of furniture by emerging Italian designers created in response to the work of Owens.

The photography is by Lodoclick and Maison Mouton Noir. It is courtesy of Galerie Philia and Le Corbusier Foundation, FLC  ADAGP, Paris, 2022.