The Arrow Studio, named after its distinctive shape, was designed by Peter Hogg and Toby Reed Architects (PHTR) for a site in the garden of their client's home in Hanging Rock, around 400 kilometres north of Sydney.

The architects saw the project as an opportunity to rethink the traditional white cube gallery, and instead based their design on the steel-clad country sheds that are typical across Australia.

"Although it is very small, it allowed us to do a riff on the basic architectural unit of the cube on tabula rasa," Hogg told Dezeen. 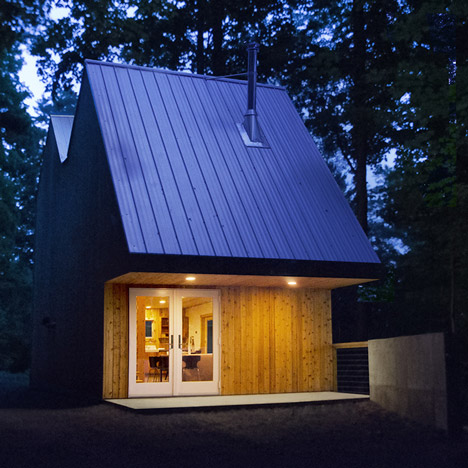 Security was a key aspect of the design brief, so the architects were asked to minimise the number of windows, locating them in places that would be difficult to break into, and that also wouldn't compromise the number of hanging spaces.

"This became the generator of the shape, which hides the windows behind the screened areas at each end," said the architects, explaining how the builders referred to these ends as "rotated gables".

The building needed to be delivered on a strict budget – little more than the cost of an off-the-shelf garden shed – so the architects specified low-cost plywood for the walls, then clad them with galvanised metal sheets.

"The galvanised sheets overlapped diagonally form a second skin which helps insulate and protects the ply from the harsh conditions," said Hogg and Reed.

There are no internal partitions within the space. The client uses it as a study, allowing him a quiet retreat from the house.

The space between the house and the gallery is used as a space for entertaining guests, while the opposite side functions as a space for BBQs, overlooking the bush beyond.

"At night, the room acts as a giant lantern, illuminating the bush garden," added the architects.

Hogg and Reed aren't the first architects to design an arrow-shaped building – Japanese firm International Royal Architecture completed a seaside house with the "form of a pure white arrow" in 2012.