"I really just wanted to enhance the story in the song," Roberts told Dezeen. "I wanted it to feel epic and I wanted to create drama that struck the right balance between being subtle and dramatic."

The father walks through a wintery landscape before boarding a steam train in the hopes of reaching his far-away daughter, after learning she is in distress. 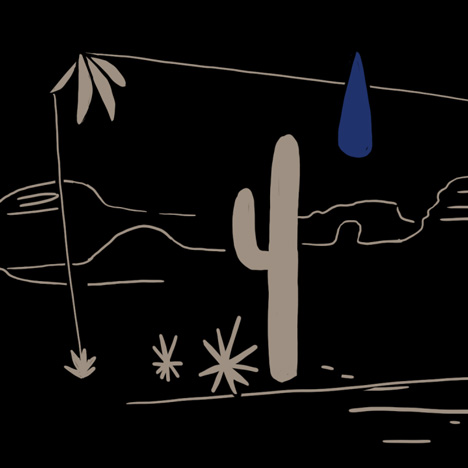 His train travels along a seemingly endless railway line through a snowy landscape of bare trees, with the passing of days and nights marked as the light changes. The railway track rises and tangles to form a mountain that the train rattles through on its journey.

Along with the father and daughter mentioned in the song, Roberts introduces another character into his graphics.

"In my mind he takes the place of the audience who sees the situation, but unlike the audience he can also communicate with the characters and help move the narrative forward," said Roberts.

Roberts, who graduated from London's Royal College of Art in 2012, filmed all of the sequences using a camera, only adding effects such as snow and air particles on the computer.

Working on two different-sized tables, he shot many of the sections separately using a green screen and combined them digitally.

"Shooting the elements separately was great because it allowed me to have a lot of flexibility to control the final shots and make them more interesting," said Roberts.

Matchsticks and cut-up lolly sticks were used to make the models, while plasticine formed the floor and old socks were shaped into the puppets. "I think the cost of all the materials you see onscreen is about £70," Roberts said.

The collaboration with Flight Brigade came about through a friendship with two of the band members. The group was initially looking for a Manga artist to create the graphics to accompany the track, but they asked Roberts to come up with the visuals after seeing his tests.

"Generally I think we were all just keen to get lost in making something cool, and I was able to do loads of research and development that I can take forward into future projects," he explained.

"I spent more time on the project than I should have but it was definitely worth it."

Sirens was released with a track called Smoke & Wine as a double A-side single earlier this week.