Rooms are housed within stark concrete boxes at this São Paulo artist's studio by AR Arquitetos, while a glazed atrium creates a light-filled space for painting (+ slideshow).

Named Atelier Aberto, which translates as Open Studio, the building was designed by Brazilian studio AR Arquitetos as a composition of indoor and outdoor spaces that include a double-height atrium, an entrance plaza and a private courtyard.

"The project proposes an exercise between indoor/outdoor and its materialisation," explained architects Juan Pablo Rosenberg and Marina Acayaba.

"While its dense and blind walls isolate internal functions from the street and the atelier's inner square, its other transparent facades open onto internal silent courtyards and gardens," they said. 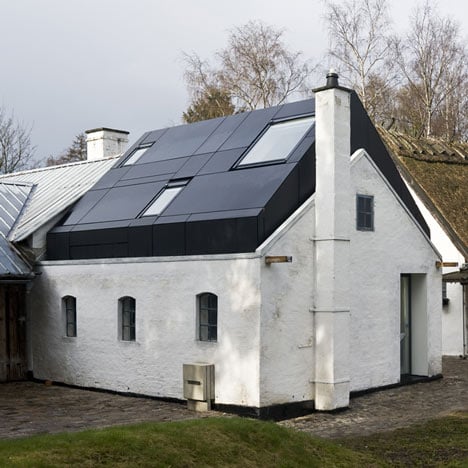 A Studio for a Danish Artist by Svendborg Architects

Three two-storey concrete boxes provide all the necessary amenities required by the artist. The largest accommodates kitchen and bathroom areas, while two smaller boxes contain an office and a gallery.

The position of the boxes frames a cobbled square at the front of the site, creating a generous entrance designed to welcome visitors into the building. A tree grows up  in the centre, allowing daylight to filter gently onto the large section of glazing.

"Half of the plot's frontal setback was proposed as an enlargement of the public sidewalk, inviting visitors to enter and reach an inner square space, configured as a double-height shed with abundant natural light," said the architects.

Within the atrium, a large wall of glazing is broken up into a grid of pivoting windows, allowing the artist to bring fresh air into the studio. A series of pendant lamps also hangs down from the ceiling to offer supplementary light.

The small courtyard is sandwiched between the office and gallery, offering an outdoor exhibition space. A concrete bench runs along the edge of all of these spaces, helping to tie them together.

The kitchen and bathroom block is slightly sunken into the ground, and this slight change of level creates a subtle boundary.

Concrete staircases lead up to the two first-floor rooms, one of which functions as an indoor balcony.

Read on for a project description from AR Arquitetos:

The project proposes an exercise between indoor/outdoor and its materialisation, the idea of limit (mass/opacity) and continuity (openness/transparency), exploring how this resource can resolve the program organisation, recreating the relation between public/private as a continuity of the logic of urban space.

Half of the plot's frontal setback was proposed as an enlargement of public side-walk, configuring a semi-public square, which 'invades' the studio as a continuity of the street between dense rectangular prisms ("buildings"), inviting visitors to enter and reach an "inner square" space, configured as double-height shed with abundant natural light, where the artist paints.

These "buildings" consist in three pure rectangular volumes in apparent concrete that enclose the functional program of the studio (artist's office, assistant and service areas, storage/showroom).

While its dense and blind walls isolate internal functions from the "street" and the "atelier inner square", its other transparent facades open onto internal silent courtyards and gardens, dissolving the boundary between interior and exterior, between building and site.

Benches cross the borders, stating that continuity. As do the walls that extrapolate the limits of building's covers, transforming internal areas in external yards, contributing to dissolve the limits. If transparency dissolves tenuous borders between indoor and outdoor, in the other hand, the thin line of a dense wall circumscribes part of frontal setback, establishing solid boundary between two voids: the semi-public sidewalk enlargement (square) and the private courtyard.