Virdis Architecture designed Lussy Sports Hall for a school in Châtel-Saint-Denis, just outside Lausanne, and clad it in vertical pine slats to create a uniform appearance. The two longest sides of the building feature the thin toothpick-shaped gaps, while also create patterns of light on the walls at night.

The sports hall is located at the foothills of the Alps and surrounded by gently sloping hills, which Virdis has echoed in the subtle slant of the roof.

"With its generous slanted roofing, the monolithic volume of the project honours the shapes and curvature of the meadow surrounding it," said the architects. 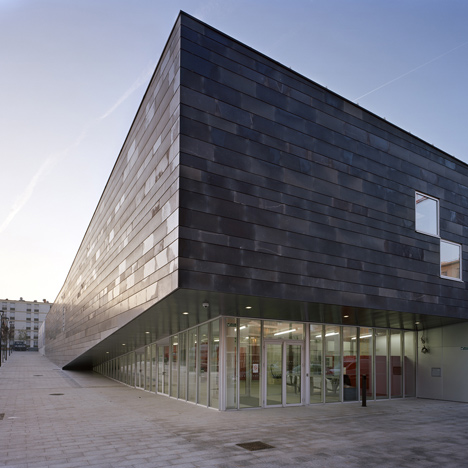 Timber cladding stops just above the ground to make the building appear lighter, and also creates clear space for drainage around the perimeter of the hall.

The two-storey hall is built on a slope and has entrances on the upper and lower levels. The lower level is built with concrete and partially recessed into the mound, and houses sports courts and changing rooms.

The upper level, which is made of timber, has a cafeteria at the side and an open corridor that traverses the width of the building, offering views to the courts below. On the ceiling, 30-metre-long glue-laminated timber beams have been left exposed.

The walls inside the main entrance are covered with perforated emblems of the seven villages that paid for the building, which were created by Swiss design agency By The Way Communications.

Wide strips of glazing on three sides of the building are designed to enhance the relationship of the vast interior with its surroundings. The lower level, which faces east, looks toward the playing fields just outside and the hills beyond, and the cafeteria on the side of the upper level, which faces south, looks out to where a new building with classrooms is being built.

The hall is heated by an off-site wood-powered system that also powers heating for the surrounding village. It claims to be the first building in Switzerland to use insulation made from recycled expanded polystyrene, which was gleaned from the waste of other construction sites and developed in collaboration with construction company Swisspor.

Here is some more information from the architects:

Isolated in a rural, hilly landscape at the foot of the Préalpes, the project was elaborated to blend with its natural surrounding, drawing inspiration from the vernacular architecture and the dominant topography of the region.

The volume of the sport facilities takes place naturally on the mound. With its generous slanted roofing, the monolithic volume of the project honours the shapes and curvature of the meadow surrounding it. The edges appear and disappear within the landscape folds, offering smooth perspective changes. Throughout the site, respecting the topography, gently sloped paths were drawn to link north and south, lower and higher portions, guiding visitors to each entrance position with ease.

The interior of the project is organised to facilitate access and the sense of a connection with the exterior, existing sport facilities. The sports field of the new building, towards the east, offers uninterrupted continuity between interior and exterior thanks to harmonised levels and a giant glass opening. The upper foyer containing the cafeteria creates another relationship with the top of the mound towards the south, where a second building with classrooms is being built.

The ground floor of the building, partially recessed into the mound, is entirely built of concrete and operates as a structural plinth. Walls above ground and the roof are made entirely out of wood. The roof structure is composed of triangulated, glued-laminated timber beams spanning 29.9 metres.

The project has been developed with a sustainable approach from early conception to its materialisation. First, in comparison to other, similar facilities, the volume of the project is decidedly compact. In addition, a central wood heating system guarantees temperature comfort in the winter, and during the summer, a combination of natural air circulation and controlled ventilation minimises the overall energy consumption of the space.

Material choices were guided by the same sustainable sensibility. Wood became the favoured material, not only because of its aesthetic harmony with its surroundings, but for its ease of assembly, reducing cost and time.

The insulation is nearly exclusively made out of 100% recycled materials, coming from other construction site waste. This technique came about from collaborative research with the engineers and the manufacturer, and was experimented for the very first time in the construction of this project. It represents a new step towards sustainable insulation technology. The building was awarded the energy label, Swiss Minergie.