The second project on Dezeen today from Swedish architecture office Wingårdhs is an eight-storey residential building constructed entirely from wood in the Stockholm suburb of Sundbyberg.

The Strandparken apartment building was designed by Wingårdhs for property developer Folkhem, who was keen to explore the potential of sustainable multi-occupancy housing.

Containing 31 apartments, ranging in size from one to four bedrooms, the building is the first of four planned for a site located next to an inlet of the archipelago in the north of the city.

"They are probably the tallest residential buildings in the world made entirely from wood," project architect Rasmus Wærn told Dezeen.

"However, things are happening fast in this field, and I do not think the height in itself is their most interesting feature – they could easily been taller if needed. Their main quality is that they make very comfortable, attractive and sustainable homes at a reasonable price." 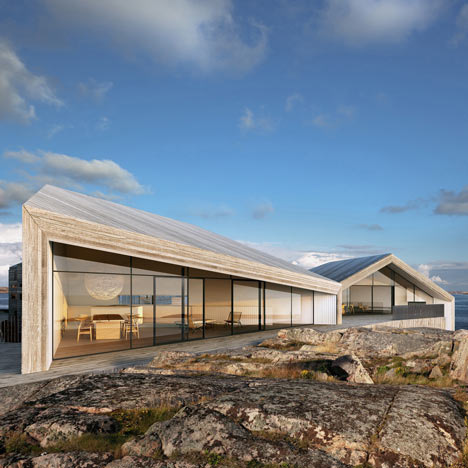 The structure's load-bearing frame was constructed using prefabricated modules made from solid wood, which are anchored to the foundations by metal rods that ascend to the height of the attic.

The external shape borrows from the aesthetic of an archetypal house, with a pitched roof and gable ends, and was influenced by the prefabricated timber properties that have been constructed in Sweden for centuries.

"The buildings are almost emblematically simple, and relate more to the straightforward houses of the 1940s and 1950s than to a parametric twisted modernity," said Wærn. "There is a urban awareness here that we think other architects and planners can relate to."

Wingårdhs, whose previous projects vary from a golden shopping centre to a thatched visitors centre, used cedar shingles to clad each of the building's facades. These help to emphasise the natural construction method, while more wood was also used internally for flooring and cladding in the circulation areas.

"Wood is, as we all know, a truly recyclable material that also provides dry and sound constructions," added Wærn. "A problem is how to make them age with beauty, as repeated painting is out of the question. Our answer was shingles, as their natural variation takes care of the variation in colour that will appear as the wood turns grey."

Balconies accessed through glazed sliding doors look out towards the water and provide an additional 13 square metres of floor space for each of the apartments.

Basement car parking is connected to the storeys above by lifts that open onto corridors, with space for benches and large windows that allow natural light to enter the interior.

Photography is by Tord-Rikard Söderström.

Read on for a statement from studio principals Gert Wingårdh and Anna Höglund:

It started in the 1990s with Arne Olson, a young man with a passion for ecology. We met one night by complete coincidence in Copenhagen. It turned into a deep dive through all that was known at the time about green building, with the big construction firm picking up the tab. Sure, wood framing ought to be the future even for multi-family housing.

Arne later came to Folkhem to be the CEO after Sven-Harry. We won an urban planning competition in Sundbyberg in 2007, and got to design four apartment buildings for Folkhem. The first is called B and has just now been occupied in the summer of 2013.

It's nine storeys high with a load-bearing frame of solid wood from Martinsson's, and the outside is entirely clad in cedar shingles. It looks like a wooden house.

A wood-framed building weighs only a third of what it would if it had been made of steel and concrete. It's so light that it has to be tied down to the foundation with 23-millimetre metal rods that reach all the way to the eighth floor.

It ended up costing 15 per cent more than it would have with conventional construction (the next one is only going to be 10 per cent more, and on the one after that we've got it). We're doing four buildings, one after the other.

This is the kind of building that elected officials should demand when they call for cost-efficient prefabricated homes. It's warm and dry inside, with the aroma of wood, sheltered from precipitation during construction under a protective roof with an integrated crane. A beloved archetype, a winning Monopoly house.