Italian designer and AC Milan supporter Fabio Novembre has used the football team's red and black colours throughout the interior of the club's new headquarters (+ slideshow).

AC Milan relocated to the 10,000-square-metre Casa Milan after 50 years in its previous headquarters on Via Turati. 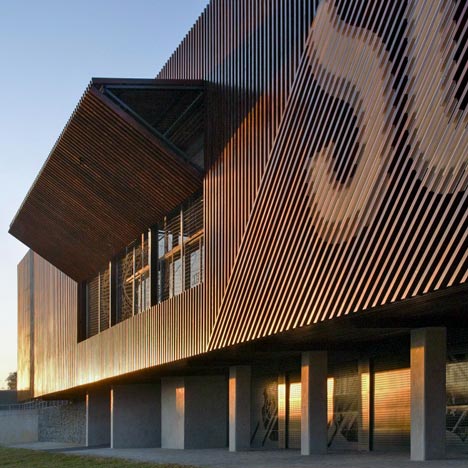 Included in the fit out are offices for senior management, a restaurant, a shop for club merchandise and a museum following its history.

Developed in partnership with Google, the club's first museum contains spaces for permanent and temporary exhibitions and features interactive elements to engage visitors.

Portraits of the best-known players are displayed on screens alongside their game statistics and biographical information.

A three-metre-high replica of the UEFA Champions League trophy, which the club has won on seven occasions, dominates the trophy room.

The shop is the first of many that the club plans to open around the world. Inside, large red figures frozen in sprinting motion are partially encased in white supporting columns.

Graphics of triumphant moments in the club's history cover the walls across three floors of office space. This area contains meeting rooms, the council room, relaxation space and press room.

The exterior of the slanted building is patterned with concentric rings of red and black that emanate from the highest point. Black silhouettes of football players are positioned along the edge of the roof as if they are running up towards the top corner.

Novembre often includes figures in his designs, including glass silhouettes at a Milan fashion boutique and two giant blue busts that face each other across a Hong Kong store.

Photography is by Andrea Martiradonna.