A fluted fibreglass wall surrounds this temporary Maggie's Centre in Merseyside, England, designed by London studio Carmody Groarke to offer support to those affected by cancer.

Located in the countryside of the Wirral, Maggie's Merseyside was designed by Carmody Groarke to temporarily support the existing Clatterbridge Cancer Centre, which is undergoing an expansion into central Liverpool.

It is one of the first temporary centres created for the Maggie's cancer charity founded by the late Maggie Keswick Jencks and architecture theorist Charles Jencks, which already boasts centres by architects including Frank Gehry, OMA and Snøhetta. 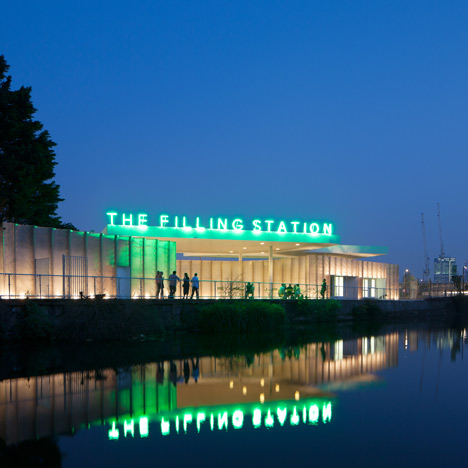 Carmody Groarke's design features a series of six cabins surrounded by a ridged fibreglass wall, similar to the one the studio installed around an old London petrol station in Kings Cross to enclose a new restaurant.

Each of the cabins is designed to be "domestic in scale and character", with simple furnishings, large windows and timber wall linings.

Some of the windows look out onto secluded gardens, which have been slotted between cabins, while others puncture the external walls, offering views out across the surrounding countryside.

"Temporary structures have been radically improvised and transformed into a series of therapeutic care rooms which are made special by their panoramic view of Wirral landscape," said the design team.

Maggie's Merseyside will offer psychological support, workshops, relaxation and stress management for residents of Merseyside, Cheshire and the surrounding areas.

Rogers Stirk Harbour + Partners won the Stirling Prize in 2009 for a Maggie's Centre in west London. Other centres currently proposed include designs by Foster + Partners and Steven Holl.