Opinion: it's easy to criticise the Design Museum for awarding Zaha Hadid's Heydar Aliyev Centre the Design of the Year prize, but there are plenty of other celebrated projects that should be attracting the same scrutiny, says Owen Hatherley.

Imagine, for a moment, that the winner of the Design Museum's Design of the Year was not the Heydar Aliyev Centre in Baku, but another big museum among the nominees, also with a fairly vague programme and also in an "emerging market" with often dubious standards of workers' rights. That is, imagine that it had been David Chipperfield's Museo Jumex in Mexico City. Would we have articles on how Chipperfield exemplifies the amorality of contemporary architecture? Would Human Rights Watch have been consulted for a statement?

We can only guess, but the fact is, Chipperfield – and Chipperfield's building – just doesn't fit the profile. The Museo Jumex was built for the private collection of the Jumex fruit-processing corporation, rather than in honour of Azerbaijan's late post-Soviet dictator.

Like most Chipperfield buildings, it appears to be elegant, crafted, ordered, a little austere, an architecture of decent manners that respects the city. It is a vanity project of a multimillionaire, Jumex's heir, Eugenio Lopez Alonso, but it does not fit in with the idea of "oligarchitecture" that has developed over the last decade or so. It has no fancy non-orthogonal geometry, does not visibly partake of the new possibilities of digital modelling and does not set out to draw undue attention to itself. So when we protest against Hadid and her latest edifice for an oil-producing country with a dark human rights record, what is it exactly we're protesting about? 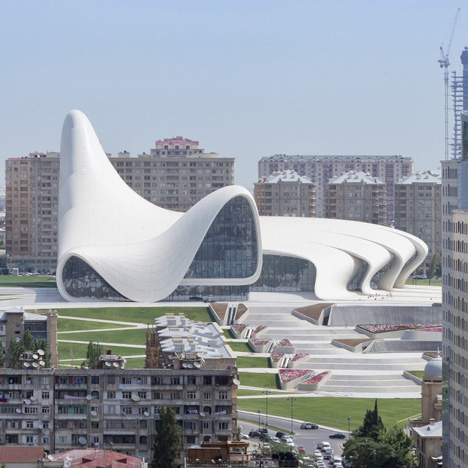 In terms of the project itself, the answer is easy enough, and the justification clear. First, as Olly Wainwright outlines in his article on the project, around 250 homes were cleared to make way for the site and the residents were not given sufficient compensation, in some cases being moved out by force.

Second, it is likely – given Azerbaijan's record in this respect – that indentured labourers were used to build it. Third, it immortalises in its name a brutal and principle-free politician who exploited economic collapse and war to guide the country from being one of the most developed republics of the USSR to becoming a hugely unequal and dynastic oil state.

Unpick these objections and they all start to look familiar

And fourth, its nasty provenance chimes uneasily with what appeared to be Hadid's unwillingness to accept responsibility for what contractors do when they build her firm's designs – notoriously, when she essentially shrugged her shoulders over the indentured workers building her stadium in Qatar. An estimated thousand workers have already died in Qatar since it won the bid to host the Fifa 2022 World Cup. Yet, unpick these objections and they all start to look familiar.

The UK and the USA are not, of course, comparable to Azerbaijan, Qatar, or other targets of arbiters of architectural ethics in the Middle East and south-east Asia. Britain or the USA are internally far less oppressive and violent, so we can easily keep from our minds the fact that they are internationally far more so. But look closely, and you can find similarities.

Little controversy met the Stirling Prize nomination of Park Hill in Sheffield, despite it entailing the demolition of around a thousand units of council housing in the city with the longest waiting list in the country. No architect is publicly asked to atone for their participation in the clearance and redesign of London's Heygate Estate, although local campaigners have pointed to a combination of subterfuge and ineptitude that has led to 3,000 people being moved out of central London, never to return.

Few in the architectural profession had much to say when it was revealed that practically every building firm in the UK – Kier, MacAlpine, Skanska, Laing O'Rourke, Balfour Beatty, Carillion, among others – partook of a constantly updated blacklist of unionised construction workers for decades. Business schools and academies sponsored by or named after unpleasant personages abound. The list could go on. To be "not quite as bad as" an authoritarian post-Soviet petrol state is no great honour, and it's about the best that could be said about the record of those countries where every major architect practices without their ethics ever being impugned.

In that context, this taps into a quite familiar debate over the poor taste of the parvenu, something similar to the 'dictator's homes' genre, where we all LOL at the hideousness of Saddam's rugs (presumably, all Merkel, Cameron or Obama's furnishings are designed by Hans Kohlhoff, Caruso St John and Peter Zumthor). The parvenu leader "imports" great architects and their buildings because they probably don't have any themselves, in these cities we've barely heard of (Baku, as Hadid herself has pointed out, is a city rich with Islamic, art nouveau, Constructivist and Socialist Realist architecture).

The spectre of orientalism is never far away here

Ozymandian rulers in Abu Dhabi buy themselves a branch of the Louvre, and get Jean Nouvel to design it. The spectre of orientalism is never far away here, and Hadid's own apparently "exotic" persona is intrinsic to this – how often does an interview pass without mentioning her accent, her clothes, or her domestic arrangements? By concentrating on these extraneous, picturesque aspects of how today's architecture of power comes into being, we're losing track of our own deeply privileged place within it.

What is needed is not a lamentation over the poor standards over there, making us feel much better about ourselves over here, but a legally binding code of conduct that professional bodies like the UK's Architects Registration Board or the Royal Institute of British Architects could enforce on their members.

It would very probably not have much to say about those things peripheral to a project – who it is named after, for instance – but it could have jurisdiction over those things that are intrinsic to how a building is made and where. It could commit architects to not building on, say, any site where social housing has been cleared for the purpose of creating oligarchs' playthings, something that could unite Baku and London's Elephant and Castle.

It could commit architects so that they must refuse to design on any project where building workers have their human rights denied – a spectrum that should extend from the supposedly benign blacklists of trade unionists in London or Glasgow to the gross near-slavery present in Qatar and Baku. In this way, architects and architectural commentators could be sure that their revulsion at the Heydar Aliyev Centre and its ilk is a matter of principle, not of taste.