Paris designer Arik Levy has created a bright red steel object to sit beneath the Atomium sculpture in Brussels, which reflects the colourful piece in its shiny spheres.

Arik Levy's stainless steel RockGrowth sculpture is positioned at the foot of the giant metal structure, designed by engineer André Waterkeyn and architects André and Jean Polak for the Brussels World Fair in 1958. 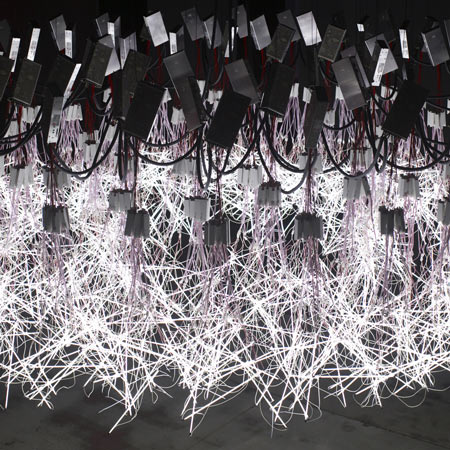 "The designated location is right under the Atomium edifice," said Levy. "It's a superb location for a coloured piece that will reflect in the Atomium spheres again and again."

The the faceted arms are coated in red paint, while the ends are mirror-polished to reflect the surroundings and echo the shiny sculpture behind.

"This reflection appears as if coming from the inside of the sculpture and it gives the idea of being able to look into its DNA structure – our social structure – as if using an atomic-force microscope," said Levy.

The piece balances on the tips of four arms, while the other elements point out in all directions.

RockGrowth was installed for the Artview 2 event held at the Atomium as part of both Art Brussels and Design September creative festivals.

An exhibition showing the making of the sculpture, including a film with Levy, in on display inside the Atomium.

It was first opened in April and will remain in place until the end of September.

Other sculptures that can be visited this summer include Ai Weiwei's interconnected bicycle frames installed in a riverside courtyard in Venice and Antony Gormley's crouched figure added to the facade of a London hotel.