News: Frank Gehry has unveiled his masterplan to overhaul and expand the Philadelphia Museum of Art by adding underground galleries that won't disturb the architecture of the existing Beaux Arts building (+ slideshow).

California-based architect Frank Gehry has been working on his proposal to extend the Philadelphia Museum of Art for seven years. Rather than creating a new landmark – as he did with the Bilbao Guggenheim – his design is restricted to the existing interiors and underground.

"What I like about it is you're going to pass by and you're not going to know Frank Gehry was there. I love that, I love being under the radar like that," Gehry said, in an interview filmed by the museum. 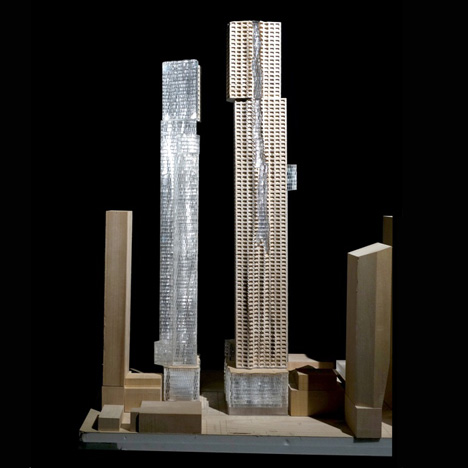 Gehry scales back Canadian skyscraper scheme to be "more Toronto"

Gehry plans to establish a clear east-to-west axis through the museum, which itself was completed by architects Howell Lewis Shay and Julian Abele in 1876.

To enable this he will relocate the auditorium and create two main entrance foyers, known as the Lenfest Hall and the Great Stair Hall, to guide visitors through to both new and existing galleries.

"We began by studying the character of this wonderful building – its DNA," said Gehry. "It is rare to have the bones of the existing building show you the way to expand it."

"From there, we used the significant assets that the original architects gave us to create a strong entry sequence and circulation pattern that connects the new galleries to the existing building in a way that makes the new galleries seem like they have always been there," he said. "My goal is to make the building feel like one coherent design statement."

Over 15,000 square metres of new exhibition space will be located underground, beneath the east terrace, and will be partially lit by a large circular skylight.

These new galleries will connect to a vaulted subterranean walkway that runs through the building from the north entrance, but has been closed to the public for over 50 years for staff to use as a loading area.

"There was quite a legacy there already architecturally," said Gehry.

"When we walked through the building we realised that all we had to do was follow the Yellow Brick Road, so to speak. It was all there and it showed us what we could do and how to transform this building into something way beyond what it is, and it all came from the original architect," he said.

The renovation is expected to take over a decade to complete. It will also create a new education centre and enhance visitor facilities, including the restaurant and shop.

Simple sandstone-clad staircases will be one of the only external additions, bringing the museum in line with modern safety regulations, while Philadelphia landscape firm OLIN will redesign the east and west plazas.

Gehry has also suggested creating a sunken seating area within the external front staircase – made famous by a scene from the movie Rocky – to offer a sneak peek into the new galleries.

The proposals are on show to the public as part of the exhibition Making a Classic Modern, which runs at the museum until 1 September.