The rough concrete structure of Powell & Moya's revered Chichester Festival Theatre in the south of England has been given a major facelift by London studio Haworth Tompkins (+ slideshow).

Haworth Tompkins – whose new home for Liverpool's Everyman Theatre this week picked up a Stirling Prize nomination – was tasked with modernising and restoring the brutalist theatre completed by British architects Philip Powell and Hidalgo Moya in 1962.

The renovation involved removing all non-original extensions, taking the building back to its original form. Auditorium and foyer spaces were then remodelled, and complemented by a new rusty steel extension.

"Powell and Moya's theatre is a much loved Chichester institution, a hugely successful national producing theatre, a modernist architectural treasure, a milestone in the development of the contemporary auditorium and the birthplace of the National Theatre Company," explained firm director Steve Tompkins. 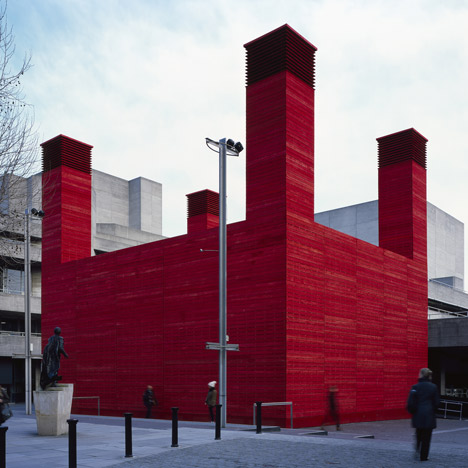 The Shed at the National Theatre by Haworth Tompkins

"So in conceiving this latest incarnation we have been careful to honour that extraordinary legacy, conserving the things that define its unique personality but improving the things that no longer worked," he said. "I hope our renovation will help both to safeguard the theatrical future and reframe the architectural boldness of this important, brilliant building."

Originally conceived as a "pavilion in the park", the theatre was the first in the UK to feature a thrust stage – a platform that extends out from the main stage into the audience.

One of the main elements of Haworth Tompkins' renovation was to remodel this historic 1,300-seat auditorium. This involved steepening the seat rakes and reconfiguring the audience layout, helping to "strengthen the connection between actors and audience".

Back-of-house facilities are now housed in a new extension, which is clad with pre-weathered Corten steel to provide a counterpoint to the rough concrete. In time, its orange tones will patinate to become a dark bronze.

"The theatre's dramatic, cantilevering concrete structure and lightweight cable-tied roof were extraordinarily bold architectural statements at the time, but successive piecemeal extensions and alterations since the 1970s had gradually reduced the clarity and legibility of the original concept," said the team.

The existing foyer was also reconfigured to make better use of space. Enclosed staircases were opened up to help bring in more daylight, while two lifts were added and a pair of cafe spaces were extended beyond the original walls.

Artist Antoni Malinowski was brought in to embellish the walls and ceilings of the cafes with hand-painted details. Haworth Tompkins added to this by designing bespoke concrete flagstones for the floor, which are speckled with thousands of tiny seashells.

Heating and ventilation services were replaced throughout the theatre to bring it up to modern-day standards, incorporating a ground-sourced heat pump, and original concrete surfaces were repaired where necessary.

"The existing theatre dated from a time before energy efficiency featured as a significant concern, and a major part of the works to improve the building fabric included the introduction of a significant amount of thermal upgrade works," added the team.

For the final stage in the project, Haworth Tompkins worked alongside landscape architect Camlin Lonsdale to restore the surrounding parkland, adding new trees, pathways, terraces and a private garden for the actors.

The Chichester Festival Theatre reopened in time for the 2014 summer festival. During the renovation, it was temporarily replaced by a structure designed by architect collective Assemble and built from scaffolding, chipboard and plastic pond liner.