A conceptual design for a London skyscraper by Paris studio Chartier-Corbasson Architectes proposes using waste generated by workers already in the building to help construct new floors as demand grows.

Chartier-Corbasson Architectes developed the concept for an office tower in response to a brief from high-rise architectural awards organisation SuperSkyScrapers, which invited proposals for an "organic skyscraper" suited to construction in London. 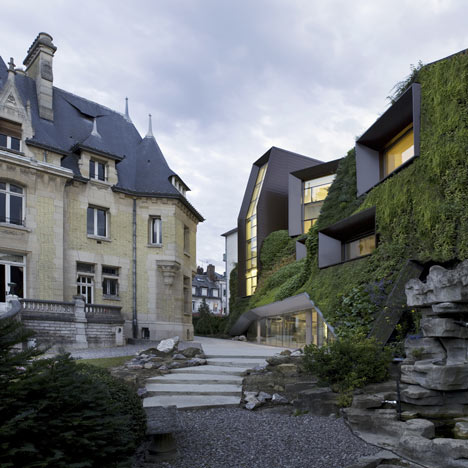 Regional Chamber of Commerce and Industry by Chartier-Corbasson Architectes

Aiming to highlight inefficiencies in the current system of speculative office tower development, the architects wanted to design a self-generating structure that extends incrementally as demand for space increases.

"At present in Europe a lot of skyscrapers are stopped because of a lack of investors," architect Thomas Corbasson told Dezeen. "The amount of construction is so huge that it is very difficult to find the money. With our proposal, you can divide the basic investment by two or three."

To enable the potential for organic growth, the architects based the design on bamboo scaffolding used throughout the construction industry in Asia.

Tubes of a uniform diameter and length would be used for the skyscraper's structural framework, negating the need for a tower crane and ensuring the only processes required on site would involve fixing prefabricated elements together.

Wind gusting against the facade would be directed through the hollow tubes towards generators fitted inside to generate energy for the building.

The towers would be designed with a predetermined shape and height, but built in stages depending on the amount of office space that has been sold.

"We don't need giant towers, we just need towers that are at the right size at the right moment to absorb the new populations," Corbasson suggested. "A lot of towers and office buildings are empty because they represent only an investment and not a social response."

Waste generated by the office workers, such as paper and plastic bottles, would be processed within the building to create other necessary building elements including floor plates and facade panels.

The architects propose constructing the lower storeys using discarded materials from the construction sites of other towers close to the proposed site in Shoreditch.

Reconditioning plants would be positioned at the top of the building to transform the waste from the offices into construction materials used to extend the structure upwards in a constant self-generating process.

Lifts running through the core would transport waste from the offices to the reconditioning centre, and on to the new level under construction.

It would be possible to relocate the reconditioning plants further up the building when required, although a permanent facility would also be located on the ground floor.

Further collection points for materials such as glass that would need external processing would be positioned at the base of the tower.

At ground level, the building's section would be rhombus-shaped to accommodate facilities such as conference spaces and meeting rooms, with the sides converging towards the top where an observation deck could be positioned above the offices.

Arranging the central lifts in a pyramidal formation would provide landing areas on different levels that could be used for communal facilities including cafes, bars and fitness centres.

Chartier-Corbasson Architectes developed the proposal in collaboration with facade engineering specialists VS-A and received a special mention in the competition. They are currently seeking investment in order to develop prototypes.