Plans for the site on the existing Cambridge Biomedical Campus centre on a triangular building designed by Herzog & de Meuron with a central courtyard and serrated glazed facade.

This will be a research and development centre, with laboratories separated from other work spaces with glass walls. AstraZeneca said that the use of internal glazing would "promote 'visible science', ensuring scientific innovation is the primary focus for all staff, both in R&D and other functions". 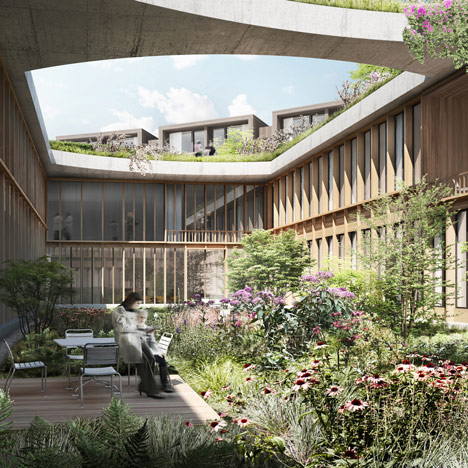 The low-rise building will also house office facilities dedicated to the company's commercial and regulatory activities.

"In designing the new building we made reference to the historical colleges in central Cambridge, which are typically low-rise buildings enclosing a central courtyard," said Stefan Marbach, senior partner at Herzog & de Meuron. "The building's proportions draw on this, as well as the open public access to the courtyard."

The triangular shape of the structure was chosen partly to reduce journey times when moving around the building and encourage more staff interaction.

"The whole structure is connected in a single loop, providing short connections within the building and modern, innovative workspaces that support collaborative working," said Marbach.

"The 'saw-tooth' roof, which carries on through to the facade, aims to unify the appearance of the building and give it a distinctive character," he added.

A formal planning application will be submitted for the site later this year, with a view to beginning construction in 2015. AstraZeneca said that when completed in 2016, the site would become its new global headquarters.

Herzog & de Meuron has been working on an increasingly diverse range of projects, with recent completions including a natural swimming pool and a rammed earth herb processing plant in Switzerland and an open-air gymnasium in Brazil.