Dutch design duo Studio Makkink & Bey has created a series of spatial installations inside the bedrooms of a former bishop's residence in Orléans, France.

The 17th-century Hôtel Dupanloup has recently been turned into a research centre for the University of Orléans. 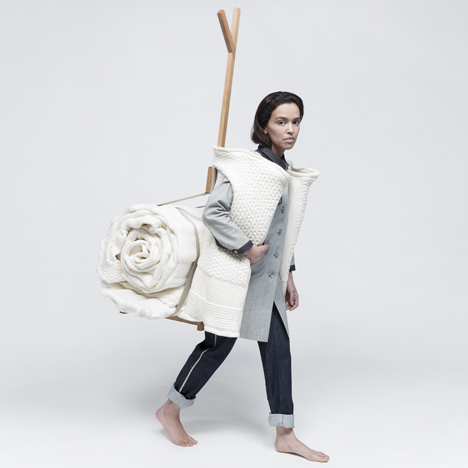 Studio Makkink & Bey were asked by the French Artistic Nationale Commission to transform the inside of the building into public spaces, meeting rooms and work spaces.

The designers used their colourful furniture pieces to populate the interiors, including the multifunctional #006 Side Seat and the wing-backed Ear Chair both produced by PROOFF. A combined table and chair named Dupanloup was created specifically for the project.

These items sit alongside antique pieces, as well as re-designs of Ikea furniture by students of École Supérieure d'Art et de design d'Orléans that participated in a summer workshop with Studio Makkink & Bey.

Throughout the building, panelling is filled in with brightly coloured graphics. These primary colours are offset by the more muted shades used to upholster the furniture.

Sheer curtains are used to divide areas and large carpets add warmth to the parquet flooring and marble tiles.

Both curtains and carpets feature old pictures taken from the archives of the local fine art museum, the Frac Centre and the Maison de Jeanne d'Arc.

"Even when not in use, these 'room in a room' interiors are intriguing spatial still lifes that portray several layers of time," said the designers.

The project is due to complete in September, when the building will officially open.

Studio Makkink & Bey's other recent design projects include a totem formed from utensils needed to make cheese and an industrial-style playground for a Dutch housing complex.