Dezeen Music Project: a stack of old electronic devices and circuit boards appear to secrete blood in this music video by director Christophe Thockler for US musician Lusine's latest track.

As the track is called Arterial, Lusine (AKA Jeff McIlwain) already had ideas about using blood when he approached Christophe Thockler to create the video.

"When Lusine asked me to direct a video for the track Arterial, he had blood in mind and wanted something that depicted blood flow, maybe with the use of microscopical images," Thockler told Dezeen.

"I felt the track needed more than just blood to be illustrated, and this idea came to me – using electronic components to emphasise the cold feeling of the electronica style and playing with blood to symbolise the warmer sounds."

Thockler compiled 15 kilograms of old electronic equipment – including computers, VCRs, televisions, phones and other devices – which were rewired and stacked on top of each other. 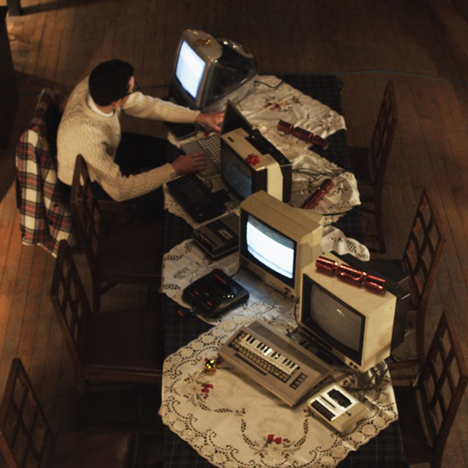 He sourced real blood from a butcher to pour over the devices. "I simply went to a butcher's shop and asked him 'are you selling blood?'" he said. "I explained that it was for a kind of 'arty' music video and that I was not a vampire or insane."

"[The butcher] was at first surprised, but after talking a bit he was really happy to help," Thockler added.

Instead of a standard narrative, Thockler aimed to create suspense and intrigue with visuals that make the viewer unsure whether the machines are producing, or powered by, the dripping red liquid.

Lights flicker and dance across the circuit boards as the blood trickles and drips over the surfaces, in time with the music.

"I wanted a video where the rhythm was created with a mix of shots focused on the lights and components, for the beat, and blood shots to illustrate the other sounds, and sometimes both," Thockler said.

Although impressed with the effect the animal blood created, he decided it would be the last time he works with it. "Even with a powerful fridge, you have to work quickly!" he said.

Macro shots are used at the beginning of the video, panning out to the full heap of objects as the film progresses.

Some elements, such as the alarm clock and watch, were also captured in stop motion to create images that suggest a faster passing of time.

Towards the end of the video, the components fizzle and melt – an effect achieved by "cooking" them with a heat gun.

"I can still remember the smell of those components burning," said Thockler. "The room was ventilated and I was safe, but wow, it smelled so bad!"

The end credits are displayed on an old glitchy Mintel computer as the final shot. Lusine's Arterial EP is due to be released on 5 August.