Walsh Street by B.E. Architecture is a three-storey development in Melbourne's upmarket South Yarra neighbourhood. It was commissioned by a couple who wanted to build their own home, and saw the opportunity to develop the property into two units.

"Together, we understood that the market for this premium location would have an expectation of luxury living," architect Andrew Piva told Dezeen. 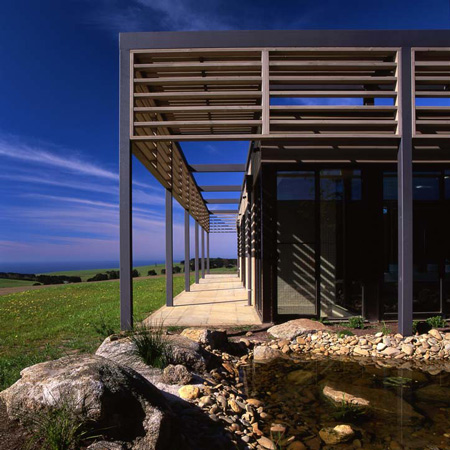 "B.E.'s response was to go one step further than designing a nice apartment, and approach the project as two houses," he said.

The two apartments are built on separate levels. They share an entrance lobby and basement for parking, but otherwise do not interact with each other.

Both feature terraces on the west and north sides, which are built on top of each other to avoid overlooking.

"The most difficult aspect was creating the feeling of privacy, not just from neighbouring houses, but from the other apartment in the same building," said Piva.

"Sight lines were carefully planned so that the deep-set balcony on the upper level is not overlooked by neighbouring properties."

The apartments replace a nondescript house that previously sat on the site, and have been distinguished from each other with different materials – bluestone cladding for the ground-floor apartment, and white render for the first floor.

"We always carefully consider re-use, but in this project it was not an option. To provide two homes instead of one, especially with the addition of the lower level and car park, it was necessary to demolish the previous house," said Piva.

Both apartments also have a study, utility room, and two living and dining spaces, and are integrated with smart wiring technologies so that the owners can control audio-visual and security features remotely.

High-value materials have been used throughout, including vein-cut silver travertine for the flooring, American walnut for the joinery, Arabescato marble for the bathrooms, and dark-brown honed Emperador marble for the kitchen island counter tops.

The first-floor apartment features a bespoke decorative screen in a circular skylight, and the steel handrail for the communal staircase has been rolled to fit the hands of its users.

"B.E. Architecture's work is primarily about expressing the unique qualities of the people who inhabit the building, which was especially difficult for a multi-unit project where the clients are only a portion of the equation," said Piva.

"However, we believe multi-unit developments are still homes for real people, and it is important to make them feel special. In developing unique, custom handcrafted details, the design incorporates a sense of personality that has wide appeal," Piva added.

Photography is courtesy of B.E. Architecture.