A veil of water stretches 40 metres between the trees of a wood in central France to form this installation by French architect Louis Sicard (+ slideshow).

Louis Sicard worked with fellow architect Emil Yusta and carpenter Thorsten Fischer to design and build a pine and copia timber structure that carries a channel similar to an aqueduct, which zigzags through the woodland in France's Sancy region. 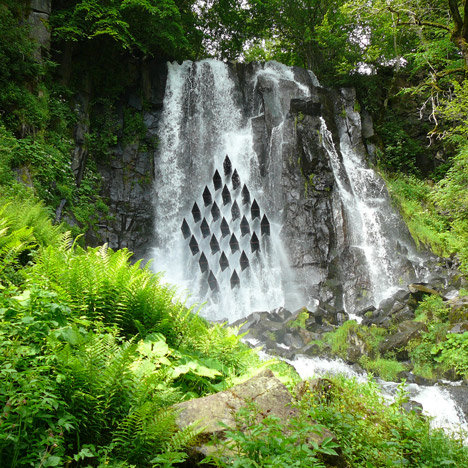 "The waterfall is called the Bridal Veil for its delicate appearance, its uniform distribution on a deposit of volcanic ash," Sicard told Dezeen.

The installation was created for this year's Horizons Sancy art and nature festival, which features a series of artworks across the region and also includes a slatted wooden structure on top of a mountain.

The base of the covered triangular channel is perforated with 4000 holes filled with small pipes, which let water pour through to form a vertical screen of water.

"When the sun is up, lights and shadows of the forest and reflections of the water finally complete the magical scene of the waterfall," Sicard said.

The aqueous curtain starts at the Rossignolet waterfall, spanning the river in front of the cascade and turning to cross a pathway.

Visitors can walk through the water, choosing to either get wet or stay dry by passing under with a handheld wooden shelter.

"From the first sketches of the projects the idea was to use the water and its characteristic as the main component of the installation," said Sicard. "The fresh sound of the source plays with the multiple reflections and transparency of the water.

At one end of the structure, a reservoir collects water from the falls and regulates the amount that can pass into the channel.

A filter prevents particles from continuing with the flow, so they won't fall on visitor's heads.

The slender timber posts supporting the aqueduct create long shadows that mimic those cast by the tall trees.

The Horizons Sancy festival takes place every year. For the 2012 festival, another waterfall installation comprised a series of triangular sections that interrupted the flow of falling water.