Horsehair tails and a candle holder are among the accessories integrated into this range of blown-glass "high-fashion sex toys" by editor Michael Reynolds and artist Jeff Zimmerman. 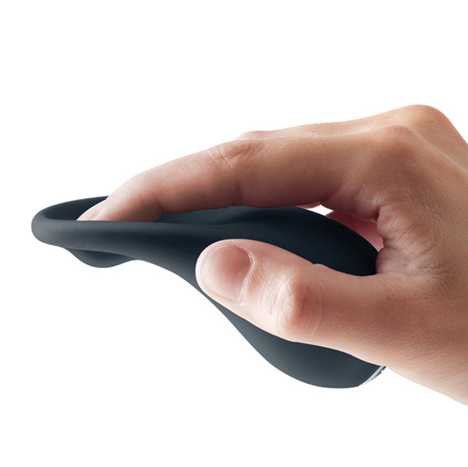 Reynolds came up with the idea for a range of sculptural sex toys after seeing a set of erotic-looking glassware samples in Zimmerman's studio.

"I had wanted to do something with Jeff Zimmerman for a long time," Reynolds told Dezeen. "In his glass studio in Williamsburg I spied, on one of the shelves, these pieces that were incredibly phallic and suggestive, but very abstract."

Accessories specialist TM1985 was brought in to make the leather straps and brass fittings for the objects, including a gag ball with an adjustable leather strap named Suck It.

A similar design with a ribbed phallus growing out from the side of the sphere is called F*** Face. "I'm sure the possibilities are endless," said Reynolds.

Another two plugs, both named Deflower, are decorated with petal shapes on the tops of stopper-shaped bases. "The reason for doing that was that when you start studying glass blowing in art school, one of the first things they teach you very often is to make flower heads," Reynolds explained.

Blow Torch has a ribbed insert at one end and an opening to fix a candle into at the other. "You can be a human candleholder," Reynolds said.

A curved double-ended wand featuring a series of connected bubbles can be used by two people at once, and is hence named Double Occupancy.

Other designs include Nightstick, based on a policeman's baton, and Big Ben comprising two connected balls.

Reynolds' references for the collection included work by photographer Robert Mapplethorpe, fashion designers Rick Owens, Karl Lagerfeld and Helmut Lang, and 1969 movie The Damned, which all have "a very black, sleek, high-fashion look".

Although each piece is shaped for different stimulations, Reynolds pointed out that they are designed to be looked at rather than played with.

"I don't suggest that anyone shove glass up their ass or their c***, down their throat or in their ear, but whatever somebody does with them is their own business," said Reynolds. "They were made to be more artful, sculptural and conceptual objects."

Wallpaper Handmade is an annual showcase of collaborations between different designers, artists and manufacturers.

Photographs are courtesy of Artpartner.