Football players disappear beneath a grassy knoll to access hidden changing facilities at a sports ground in northern France by MU Architecture (+ slideshow).

French studios MU Architecture and Les Particules worked together to replace the locker rooms and bathrooms for the football pitches just outside the town of Forge-les-Bains, tucking the new amenities under a plant-covered roof. 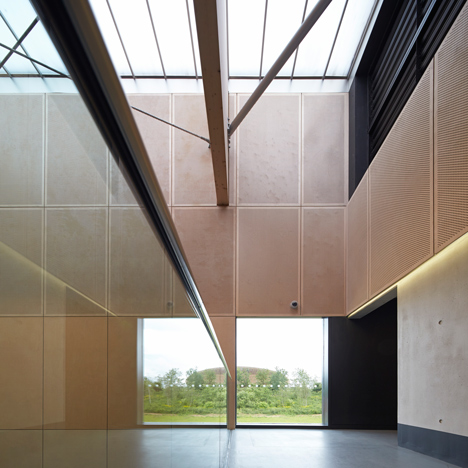 The architects designed the structure to conceal the facilities and create a raised area for fans to watch the action from.

"The location of the building has been chosen to preserve as much of the existing free space as possible," said the architects. "Its shape also fits the geography of the site and the way the different athletic fields are connected to one another."

The green roof slopes down over both sides of the structure, which forms a raised triangle in the landscape.

"We wanted the building to disappear into the background to put the focus on the athletes entering and leaving the space," architect Grégoire Dubreux told Dezeen.

"The shape is connected to the flow on the sports complex itself; it opens toward the entrance and the fields and the slopes are created to allow spectators to climb up to sit and watch the fields which previously had no seating."

Steel grating more commonly used for flooring covers the external concrete walls, while a central larch-clad block at the front of the building houses public bathrooms.

A corridor wraps behind this block, leading to two pairs of changing rooms that each share a shower room. The building also contains an office, entered directly from outside.

Taps to wash muddy boots before entering are located in front of the entrances and players can also scrape their studs off on the cladding.

The building is surrounded by a low wall made of woven willow branches, providing a natural barrier to hold the earth in place.

"We stuck and weaved willow branches to stop the dirt from slipping from the roof," said Dubreux. "The willow lays roots easily and creates a strong and natural wall to hold the ground in place."

"We wanted to create a contrast with the usage of the natural environment and a visual architectural intervention," he added.