Italian designer Emanuele Pizzolorusso has designed a flexible flower pot that can double in capacity to accommodate plants as they grow and prevent the need for repotting (+ slideshow).

Emanuele Pizzolorusso's silicone rubber Fold Pot starts out with its top folded down to create a small container suitable for a young plant. 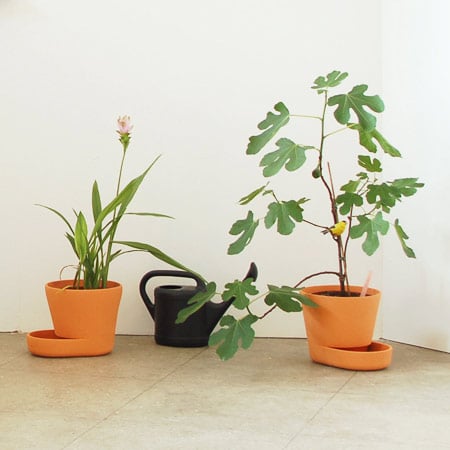 As the plant grows, the top can be straightened out, doubling the capacity of the pot. Additional soil can be added, providing space for the plant's roots to extend.

"While plants continually change, their pots have always been designed as immobile objects," Pizzolorusso said. "I saw some workers in a public garden in Helsinki with a plant in a container that looked like a sack. I started playing around with the concept of a soft pot that could be unrolled to become bigger."

One of Pizzolorusso's biggest challenges was to achieve the desired aesthetic at each stage of unfolding. The designer made several 3D-printed prototypes before moulding the final design in silicone rubber.

"It was important to keep a perfectly circular shape even when the pot was folded," he told Dezeen. "This was achieved by engineering the wall thickness in several parts of the object."

"Usually silicon rubber objects are designed to look soft, playful and rubbery," said the designer. "Instead I used very sharp edges, as if the pot was made of marble or some other very hard material."

"I also decided not to use the pop colours usually associated with plastic," he continued. "The final result is a plant pot suitable for growing small plants and spices, that works with contemporary interiors and wooden furniture."

The Fold Pot was designed for Hong Kong brand Zincere and is available in black, grey and terracotta colours.