The title of HNN's song, Je Pars, means "I leave", which Arcier chose to interpret as a euphemism for death.

"The first image that came into my mind was floating bodies that at the end disintegrate," Arcier told Dezeen. "I have worked before with human bodies on a very short film called Arlequin. This time I wanted something more realistic and disturbing." 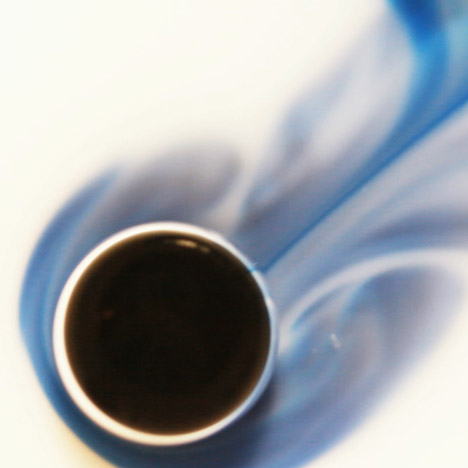 In Arcier's video, what look like human skins twist and billow in time to the music as if they were made from liquid or smoke.

The shapes start off as recognisably human, but deteriorate into more abstract forms as the video develops.

"When you deform bodies a little they quickly become disturbing," Arcier explained. "It is an interesting feeling but I wanted the film to become more and more abstract as the deformations become more extreme."

"At the end they are just abstract and deformed moving shapes; we only know they are bodies because of the beginning of the film."

All of the visuals in the video were created digitally, with photographs used for reference.

"I didn’t have the budget to rent a render farm so the rendering took one month on three computers," Arcier said. "One frame of the film took nearly half an hour to render and the film contains more than 7,000 frames."

However, Arcier feels that the effort was worth it for the end effect.

"Someone said that the film is weirdly beautiful, others think that it is mesmerising," he said. "Those were the kind of feelings I wanted this film [to evoke]."