Barcelona architect Sergi Pons has exposed stone walls and wooden beams during the renovation of this apartment in the city's Les Corts district.

Creating a new home for a lady and her two cats, Sergi Pons stripped out all of the partition walls to open up the space and reveal the apartment's original features. 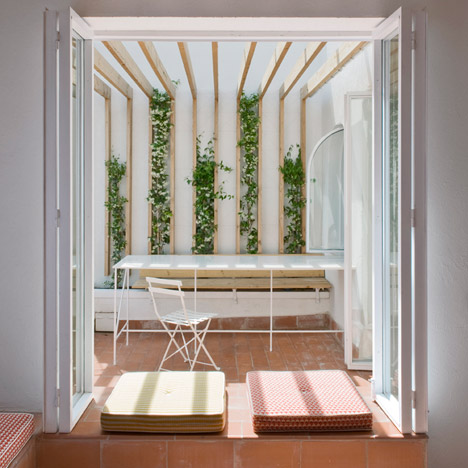 CaSA renovates Rocha Apartment with an assortment of tiles

He added a white cube in the centre of the plan to house the bathroom and create a vertical surface for kitchen units on one side, next to the wall covered in local Montjuïc stone.

"We decided to place a 'pure', white and geometrical cube at the centre of the apartment, which contains the kitchen and the bathroom, and its walls do not reach the ceiling," said Pons.

The cube divides the spaces without creating formal rooms, sheltering the sleeping area at the back from the open-plan living area in front. "This element gives privacy to the bedroom, but keeps the spatial and visual continuity as a whole," said Pons.

The front door opens into the L-shaped living room, with sofas and storage shelves tucked away out of view. A white dining counter is positioned in front of the wall of kitchen units, which is divided across the middle by a strip of mirror.

"The kitchen mirror divides the cube in two halves, so the stone seems to be part of the bathroom, giving a feeling of continuity and profundity," said the architect.

Vaults of tiles between wooden beams span the length of the ceiling, passing over the cube uninterrupted. Wooden flooring steps up at the bathroom cube to a raised platform, creating a more intimate ceiling height.

"To give a more cozy ambience, the owner has built a ladder to help the cats climb up to the top of the bathroom ceiling, where the've found their favourite spot to play," Pons said.

A large window at the foot of the bathtub lets in light from the sleeping space, where the stone wall is rendered and painted white behind the bed.

An opening in the perpendicular wall gives access to an enclosed balcony with large windows, where the wooden floor gives way to mosaic tiles typical of Barcelona apartments.

Similar tiling has also been used for small apartment in the city's gothic quarter and a renovated flat in the Catalan capital that was awarded World Interior of the Year 2013.