Thousands of ceramic poppies have been planted around the Tower of London for tomorrow's centenary marking the start of the First World War (+ slideshow).

Titled Blood Swept Lands and Seas of Red after a poem written by an unknown soldier, the collaboration between ceramic artist Paul Cummins and set designer Tom Piper will see a total of 888,246 poppies added over the summer until they encircle the tower. 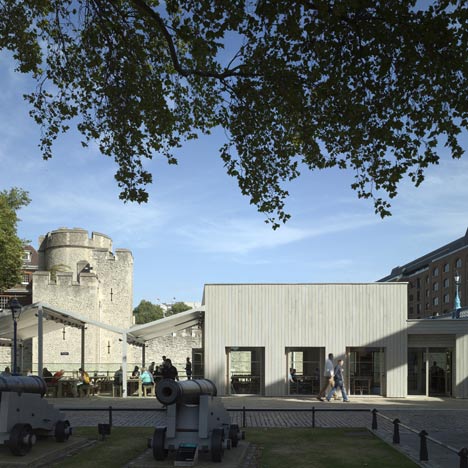 The poppies – a symbol of remembrance in the UK – have been created in porcelain by Cummins and distributed to create fields of red around the former moat of the historic landmark, known formally as Her Majesty's Royal Palace and Fortress.

Piper arranged the poppies so they appear to pour out of an opening in one of the turrets. A wave of flowers also rises over the causeway used by visitors to enter the castle, one of London's Historic Royal Palaces and home to the crown jewels.

"They could be tears, they could be blood flowing or it could be poppies growing unnaturally tall to climb over the walls," Piper told Dezeen, offering possible interpretations.

Pathways around the grassy area of the former moat wind between the flowers, which are supported on thin metal stems that stick into the ground.

The installation will be formally unveiled tomorrow to commemorate 100 years since the first full day of Britain's involvement in the First World War.

Each flower represents a British military fatality during the war, which began in 1914 and ended four years later. "When you think about that each one is a life, it's extraordinary and rather moving," said Piper.

The first flower was "planted" on 17 June by Crawford Butler – the tower's longest serving Yeoman Warder, or Beefeater – and over 8,000 volunteers will help to complete the field.

Piper estimated that around 110,000 poppies are currently in place within his installations and the field around the west side of the building.

"It's like a giant Pointillist sculpture, in which every poppy is a dot," Piper said. "Like with Pointillism it takes a long time to fill in the gaps."

The poppies will be available to purchase for £25, with proceeds going to a number of charities that raise money for the armed services. "The whole installation will be dispersed across the country and around the world," said Piper.

A programme of events will accompany the installation, which will remain until 11am on 11 November – the UK's Remembrance Day – when the last poppy will be put in place.

Elsewhere in the city, Tobias Rehberger has patterned a docked British warship with distorting black and white graphics to create another artwork marking the centenary.