This concrete house in the Portuguese town of Palmela by Lisbon office Paratelier was cast inside wooden panels that were then used to build its interior (+ slideshow).

Paratelier designed the property for a site on the end of a terrace in the centre of the town, with views towards the medieval castle perched on top of a nearby hill. 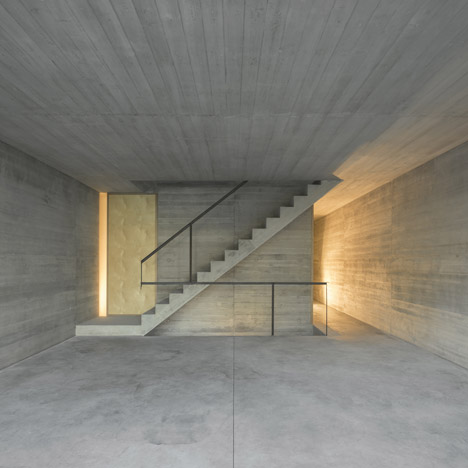 Townhouse in Lisbon by ARX Portugal

The house's simple monolithic form references the solid walls of the fortress and the geometric hipped roofs of the surrounding buildings, while the ochre pigment added to the concrete evokes the colour of the archetypal tiled roofs.

Windows mounted flush with the facades are irregularly spaced around the building, while the front door facing the square is set back slightly in an exaggerated tall and narrow opening.

The external concrete walls were cast inside pine panels, with the grain of the wood creating a textured finish on the final surface.

The panels were subsequently cleaned and planed so they could be reused internally as floorboards, walls and built-in furniture. The architects claim that 93 per cent of the wood has been reused in the project.

A double-height entrance, filled with natural light from patio doors and a window set in the end elevation, leads to a staircase that ascends to the first floor.

Private areas including bedrooms and a bathroom located on the first floor are sandwiched between a circulation space containing the stairs on one side, and a corridor and a terrace that runs along the length of the rear facade.

A second flight of stairs continuing to the top floor is designed with open treads formed at the junction of vertical balustrades, which rise up from the floor and descend from the wall above.

The stairwell offers evidence of the building's construction process, with the bare concrete walls on one side facing the timber in which it was cast on the other.

The kitchen and dining space is situated on the second floor, along with a lounge area and a small desk space at the top of the stairs that looks out over the square.

Sliding doors at the rear of the space open onto a terrace, enclosed by a railing made from the same rusted steel reinforcing bars used in the cast concrete.

Ceilings on the top floor slope to follow the building's roofline, and a skylight is incorporated above the stairwell to direct light down into the centre of the house.

The kitchen cabinets and sections of the walls are also constructed from the repurposed wooden moulds.

Photography is by Leonardo Finotti and used with permission.