Timber frames that resemble traditional fish-drying racks by Norwegian studio Rintala Eggertsson Architects have been constructed on an island in Norway to host events during a cultural festival (+ slideshow).

Rintala Eggertsson Arhictects designed the structures for the SALT festival, set to take place on the mountainous island of Sandhornøya – north of the Arctic Circle. 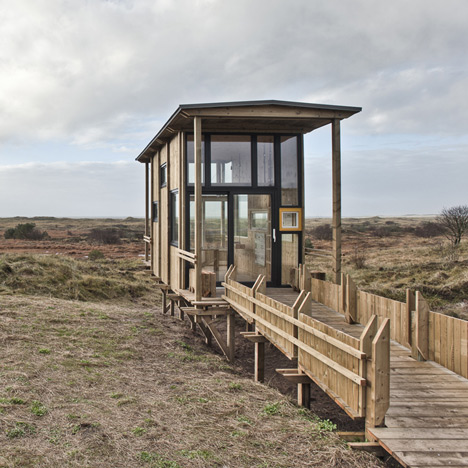 The series of temporary wooden buildings will create spaces for activities and shelters for revellers during the week-long festival.

Working with artist Joar Nango, Rintala based the frame for the main pavilion on wooden "fiskehjell" or fish-drying racks.

These were tall constructions built by arctic residents who hung their fish from the structures so they would dry faster in the cold winds, preserving them in preparation for the long, dark winter.

"For thousands of years, such fish racks have been seen along the northern coast, on exposed headlands and small islands, where winds are strong and fish dries fast," said the festival organisers. "Today, in many places, these are in the process of being torn down and forgotten."

The racks were built to be lightweight and easy to dismantle in case the nomadic communities needed to move on, providing a link to temporary festival architecture.

The largest structure is formed from a row of A-shaped frames connected by horizontal batons and braced with diagonal struts.

Called the Gildehallen, it measures 25 metres in length and 12 metres high to hold up to 1,000 people as a venue for music concerts, DJ sets and parties.

Two layers of fabric will be added before the festival to insulate the structure, keeping the space warm and dry.

A smaller version of the fish-rack design will function as a sauna when covered, with four large wood-burning stoves heating the space during film screenings, debates and seminars. The Amphisauna will also feature a glass wall, providing views of the ocean and sky.

Lodges for visitors to sleep in are positioned on stilts. These are based on traditional "njalla" huts, which were raised off the ground to help prevent animal attacks.

SALT runs from 29 August to 6 September. Photography is by Gunner Holmstad.

The summer festival season is in full swing, and other projects we've featured for similar events this year include modular wooden sleeping cells for people who don't like tents and a temporary plywood "temple".

More architecture and design in Norway