Four red cedar-clad boxes are positioned to form courtyards and gardens in-between the living spaces at this house in a Tokyo suburb by Japanese studio Architect Cafe (+ slideshow).

Positioned on the outskirts of the Japanese capital, House in Komae combines features from both urban and rural architecture. 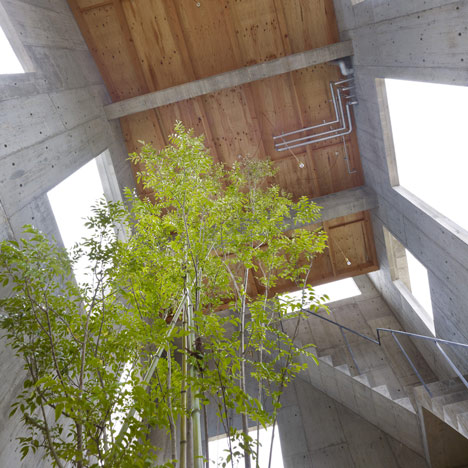 Architect Cafe chose to build on only half the site, treating it like a tight city plot that was then broken up by a series of courtyards and green areas to evoke the sense of country living.

"Figuring out how to live in this city-like and countryside-like situation is the most important theme for this house, and this theme has been translated into creating a new relationship between inside and outside," said the architects.

The house is made up of four different-sized volumes connected by ancillary corridors, all clad in vertical strips of red cedar. These are positioned to form two courtyards between them and an open garden that runs along the east side.

Facing the street, the first and shortest volume houses a single-car garage. A free-standing wall beside it conceals the main entrance, which is accessed from the side.

The front door leads into the second box, which is taller than the first but still only one storey. This cube includes storage space for coats and shoes, and a small bathroom.

A short corridor leads through to the largest structure, ramping up slightly past the first paved courtyard on the left that can be seen through a fully glazed wall.

The main living spaces are located within this volume, including a double-height lounge towards the front and kitchen and dining areas towards the back.

Windows facing the patio slide apart on both levels, opening the space up to outside. An open-tread staircase leads up to a small bedroom, closet space and a balcony that wraps around the void in front of the windows.

The final building can be reached on both levels, and features the master bedroom and bathroom. Another staircases ascends up to two further bedrooms on either side, each with walk-in storage spaces.

The second terrace fits around the west side of this building in a L-shape, with a single tree planted at the end of the decked area. More trees and shrubs are planted in the garden on the other side of the house to create views of greenery from the rooms.

"Residents can experience a country and city atmosphere at the same time while moving through the house in everyday life," the architects said.

Japanese ash wood is used for flooring, storage units and some ceilings, providing a softer colour than the darker cedar on the exterior.

Flat roofs are covered in gravel, which is also used to form borders around the external walls.

Japanese houses are often designed around patios or gardens to create a relationship between outdoors and in. Other examples include a home by Shigeru Ban with a teardrop-shaped courtyard at its centre and a house in Osaka with a garden snaking between its cedar-clad walls.