Dezeen and MINI Frontiers: architect Carlo Ratti claims the heating system he developed with MIT, which uses motion sensors to focus beams of infrared radiation on people as they move through a building, can be "one order of magnitude more efficient" than traditional methods.

"If you think about it, we waste a huge amount of energy to heat up buildings even when they are empty or if there are very few people in there," says Ratti, whose Local Warming project is on show at Rem Koolhaas' Elements exhibition at the Venice Architecture Biennale. "The idea was, what about concentrating heat just on people? To create almost like a bubble of heat around ourselves." 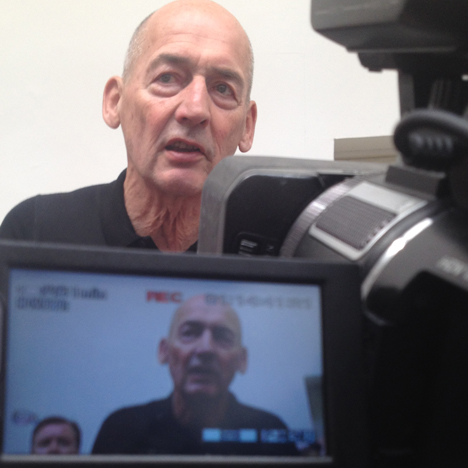 He claims: "When you look at places with not many people, or places where occupancy changes over time, you could actually get almost one order of magnitude more efficiency with this kind of heating."

Ratti's Local Warming System, which he developed with MIT's Senseable City Lab, consists of infrared lamps mounted on the ceiling, which tilt and rotate to focus beams of radiation onto people as they pass underneath.

"You create an infrared radiation that can be focussed and concentrated on people," Ratti explains. "As you move the infrared radiation will move with you. The lamps throw light in a parallel way, and they can rotate and focus on a person and then create a local climate around them."

The system relies on using motion tracking technology, which can be implemented in a variety of ways. One option, Ratti says, is to use the signals from people's mobile phones to track their position in a building, which means each person could choose their own temperature settings.

"Not only do you save a lot of energy, but you can have a more personalised climate around yourself," he says. "If you do the motion tracking using your cell phone, then you can record your personal information and have your own personalised climate."

Ratti believes that digital technology will radically transform the way we interact with our built environment.

However, Ratti says that this will not result in radically new architectural forms.

"I'm sorry to say that [buildings in the future] will not look incredibly different from what we know today. As humans we need horizontal floors, vertical facades, windows to protect us from the outside environment. But the life inside those buildings will be incredibly different."

The music featured in the movie is a track called October by UK Producer Jo Noon. You can listen to the full track on Dezeen Music Project.