Taiwan design studio Drilling Lab has created a selection of aluminium vessels that look like they're made from sections of industrial water pipes (+ slideshow).

Drilling Lab founder Lu-Wei Chen designed a series of cast-aluminium parts based on pieces that could form a system of pipes for transporting water. 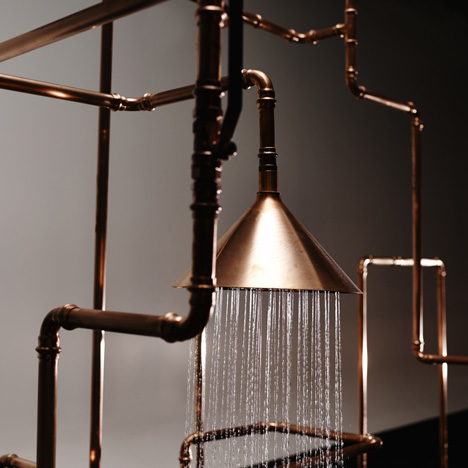 WaterDream by Front for Axor

"I created new objects based upon the concept of industrial water pipe system, by casting an aluminium alloy and lathe working," Chen told Dezeen.

The set of parts can be fixed together in different combinations to form pitchers, bottles and containers.

"I wanted to create something that is flexible and fun to be assembled," said Chen. "Users could bring their imagination and creativity into full play, and at the same time, the object could be kept long because of their multi applications."

Pan-like bases pair with funnel-shaped tops that narrow to thinner tubes, into which cork stoppers fit to seal the vessels.

Sections are joined with nuts and bolts around wide lips, which can also be used as a surface for attaching handles.

"Each has its own compositions as well as functions respectively, while both could be deconstructed and reassembled," Chen said. "Therefore they are very open to users' creativity."

He hopes users will come up with their own applications for the parts, which could include ice buckets or watering cans.

The Water Pipe Series is currently at prototype stage.

Other designers have used aluminium to form benches and stools that look like folded metallic paper, and a clothes rail inspired by scaffolding.