This Montreal student housing block by Kanva is clad with concrete panels that are engraved with historic pictures of the site (+ slideshow).

Kanva's student accommodation is located on a formerly vacant plot north of McGill University's Milton gates in the Canadian city. 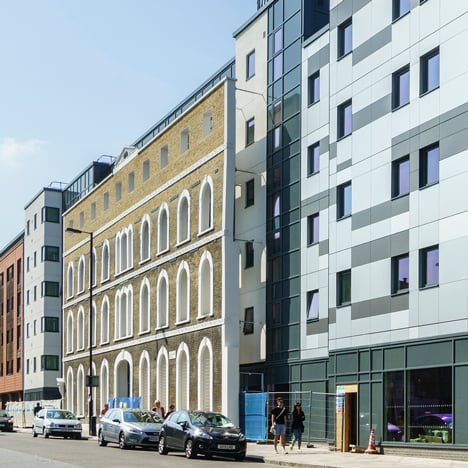 Its facade features a sequence of stills from Thomas Edison's 1901 film Montreal Fire Department on Runners, which shows the 19th century building that formerly occupied the site before it burnt down in a fire.

Positioned in a heritage zone, the Edison Residence – named after the film maker – was limited to a material palette common in masonry so Kanva chose to experiment with photoengraving concrete to create a unique facade.

"The process of photoengraving concrete was selected for its sensitive properties; it does not overwhelm the viewer but rather invites the user to re-imagine a story, as they move past or through the building and the film stills progressively move in and out of focus," said the architects.

To create the effect, vertical striations are carved into unmasked areas of a panel to form a relief.

Masked sections are left in their original state, creating a dual-tone image that matches the photograph.

"As students occupy or visitors pass by the site, their proximity and angle relative to the facade, in addition to the speed at which they move, transform the way the sequence is viewed," the architects explained.

Windows on the front facade are also screen-printed with similar images so the sequence isn't broken.

The main entrance is accessed from the road via a porte-cochère tunnel typical of the city that leads under the first floor, also clad in the concrete panels and featuring a yellow ceiling.

"The primary entrance is through a porte-cochère, a contemporary tribute to Montreal's traditional method of building a protected passage for horse carriages, which offers an intimate approach to the building," the architects said.

The building is divided so communal areas including a lounge, a kitchen and bathroom facilities are located along the street facade.

Private bedrooms are accessed from a corridor running towards the back of the structure.

Six rooms are situated on the ground floor, the three floors above each contain eight rooms, creating space for 30 students in total.

Each student room features floor-to-ceiling built-in storage, which frames the bed along one wall and creates an alcove for a desk opposite.

Exposed concrete surfaces on the ceiling and walls are interspersed with white plastered sections, while a polished concrete floor runs throughout the building.

Yellow furniture, doors and sections of corridor match the tunnel ceiling and patchwork paving stones in the communal garden that wraps around the building.

Photography is by Marc Cramer.