The extension to this refurbished house in Australia includes a covered outdoor space built around the trunk of a large lemon-scented tree (+ slideshow).

Melbourne architecture firm B.E. Architecture was asked to refurbish an existing period home in the Sydney suburb of Valcluse, adding a two-storey extension at the rear as well as a covered outdoor dining space.

Rather than remove an existing tree on the site on Hopetoun Avenue, the architects chose to plan their design around it. 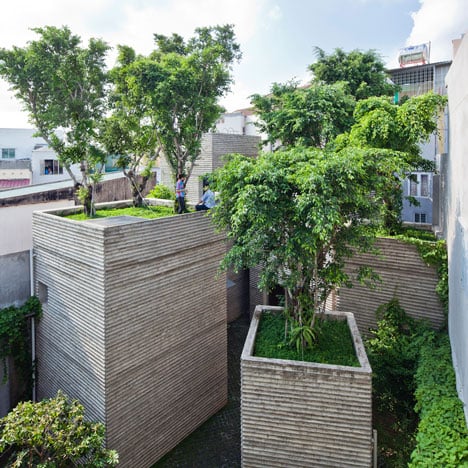 The original family house on the site was built using sandstone, so B.E. Architecture wanted to create a new addition with a less solid appearance that would act as a contrast and keep the tree as a key feature of the design.

"With sensitivity to the site's inherent strengths, the design embraces the preservation and integration of the established tree allowing it to remain the dominant feature on the property," said the architects.

"Offering an intentional point of difference to the solidity of the existing sandstone house, the new addition is a gentle intervention."

Erected on a sloping site, the majority of the structure – which includes a new underground garage - was created using thin concrete.

Strips around the edges of the building were left exposed to create a contrast with the white render used to finish the rest of the concrete surfaces.

Dark timber cladding wraps the structural columns on the facade, breaking up the floor-to-ceiling glazing used on both levels, and is also used to clad portions of wall.

At ground floor level, an open-plan kitchen, dining and living area takes up the entirety of the indoor portion of the extension. Concrete flooring continues outside to form steps down to a square lawn.

An outdoor dining space leads out from the end of the kitchen on a platform suspended above the ground, with columns to preserve the roots of the tree.

Pale timber decking was used for the floor, with a hole created to accommodate the trunk of the gum tree. The branches rise up through a rectangular indent in the flat concrete roof.

A concrete swimming pool and seating area beyond the covered dining platform are also constructed on a suspended platform, with cubic planters created out of white-rendered concrete to match the rest of the project.

"Preservation of the tree required the structure to be physically light. The suspended platform also provides a generous planted area creating obscured views of the house," said the architects.

Alterations to the ground floor also include a new tiled entrance area with a glass front door, placed on one side of the back of the original building.

The space within the existing building is taken up by two more living rooms, a utility room and a bathroom.

A curved staircase at the end of the entrance hall leads up to the first floor, where a master bedroom with walk-in storage and an en-suite bathroom, and a covered balcony, occupy most of the new addition.

"The upper level of the extension sits in the branches of the tree floating above the bottom structure to provide a unique treetop setting overlooking views to the Sydney Harbour," said the architects.

The remainder of this level is occupied by another bedroom with an en-suite, three more rooms and a shared bathroom.

The basement, containing the garage and a small washroom plus storage spaces, is accessed via a staircase to one side of the garden.

B.E. Architecture's other projects around Australia include a house in Melbourne clad with strips of travertine, and a home in coastal Victoria surrounded by a steel and timber grid.