The music video for Selway's single Coming Up For Air consists of a series of vignettes that have been styled to look like classic movie scenes being shot on set.

Each scene features a swooping camera movement, traditionally used to emphasise a significant moment or shocking revelation in a movie, which NYSU instead use to reveal the artifice in each set up.

"The song talks about a magic moment when everything changes around you," NYSU director Jesus Hernandez told Dezeen. "In the classical 60s movies, zoom movements are used to indicate a change in a character's behaviour." 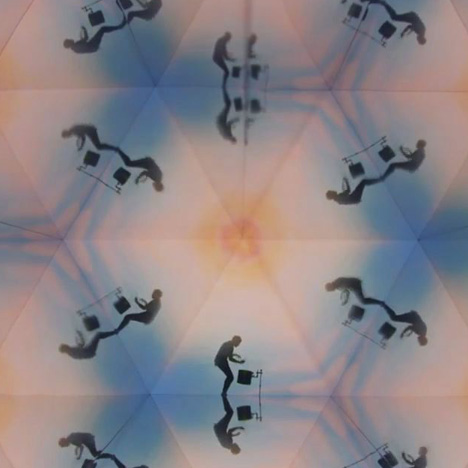 "We loved the idea of using a zoom movement that reveals a completely different situation. You discover that you are watching a fake trailer for an imaginary movie called Coming Up For Air."

Many of the shots start off so wide that you can see the green screen or piece of set that the actors are working with, before zooming in for a close-up on their faces.

In one example, the camera swoops underneath a small tank of water as it focuses on the actor, to make it seem like it was shot from beneath the surface of the sea.

In another scene, the camera zooms through a horizontal cylinder until two detectives appear at the end shining torches, as if peering down into a hole in the ground.

"The main idea of the video was to convey the precise moment when something changes radically," explained Hernandez. "Everything can change with the correct perspective."

All of the scenes in the video feature moments of fear or anguish, with one depicting a dead body.

"We wanted to get a strange atmosphere, inspired in the noir genre," Hernandez said. "We didn't want to show only the camera tricks. The characters are not happy. They have serious problems."

"We wanted to play with these two stories in the same shoot – the actors' personal problems [working with the set to get the right shot] and the problems of the character they are playing."

Coming Up For Air is a single taken from Selway's forthcoming Weatherhouse LP, the second solo record to be released by the Radiohead drummer.