Dezeen and MINI Frontiers: Roland Lamb, inventor of the squishy-keyed Seaboard piano that won the Designs of the Year 2014 product category, claims we are on the cusp of a new generation of "multidimensional" digital musical instruments.

"I think we're now facing a new beginning in music," says Lamb, CEO of East London technology start-up ROLI. "The worlds of digital and acoustic music are starting to come together."

Digital music is usually produced by "pressing buttons, turning dials or moving faders," Lamb says, but new instruments are emerging that will change all that.

These gloves will "change the way we make music," says Imogen Heap

"Electronic music is not really designed for the body," he explains. "You lose that sense of real time physical interaction. Now we're seeing lots of cool instruments that are trying to recapture that physical relationship."

He continues: "We're going to see more and more of these multidimensional instruments that allow you to pick up on different dimensions of movement and gesture and physicality."

Lamb's own contribution to this new generation of instruments is the Seaboard, a piano keyboard with soft, pressure-sensitive keys that allow musicians to alter the pitch, volume and timbre of notes in real time. 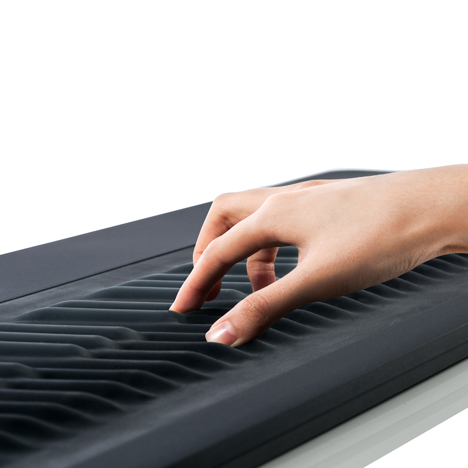 Sliding a finger between keys on a Seaboard changes the pitch, in a similar way to playing a string instrument, and musicians can also change the volume and add vibrato to notes by the way they play.

"The Seaboard is our first product and it's a flagship of a new form of interaction that is more intuitive and organic," says Lamb. "The Seaboard is like an evolution of a piano keyboard. You can play it just like a keyboard, but with a Seaboard you have this continuous wave of keys. You can play a key and press into it and move your finger in different directions and use gestures, and those gestures modulate the sound."

Not only do the keys provide a more intuitive way for musicians to control their sound, they also provide tactile feedback to the player, in an attempt to replicate the feel of playing an acoustic instrument.

"As I push it in one direction or another direction, I feel it pulling back on me, in much the same way when you bend a guitar string you feel the string pulling you back," says Lamb. "So that makes it into a very intuitive experience to play."

The music featured in the movie was improvised and performed by Heen-Wah Wai.