News: the OMA-designed Taipei Performing Arts Center – a theatre complex centred around a transparent cube – has topped out today in the Taiwanese capital (+ slideshow).

First unveiled by Rem Koolhaas' firm in 2009, the Taipei Performing Arts Center (TPAC) will offer three auditoriums, including a 1,500-seat grand theatre and a pair of 800-seat playhouses, one of which will be contained in a large spherical volume. 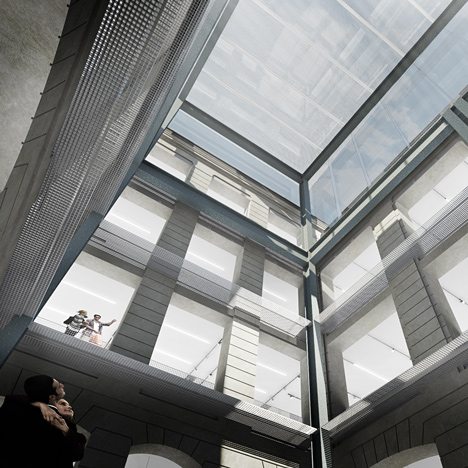 Each auditorium is designed by OMA to be able to function independently, but they will also be able to share backstage space and mechanical facilities.

"This arrangement allows the stages to be coupled for unsuspected scenarios and uses. The design offers the advantages of specificity with the freedoms of the undefined," explained Koolhaas.

The three theatres will be externally clad with aluminium, while the central cube will feature a facade of corrugated glass and will be lifted off the ground to create a public plaza under the building.

"With its superstructure finished, TPAC's connection with the surrounding urban fabric becomes apparent," said David Gianotten, the OMA partner in charge of the project.

"The performing arts centre responds to the adjacent Jiantan MRT station and the night market, channeling the energy of the informal public life of the surroundings into the site and the future building, intensifying their vitality," he added.

Construction of the TPAC began in 2012 and is set to complete next year. With the structure now in place, installation of the facade will begin in October.