There are two layers to this residence in Tokushima, Japan – the first is a living room that looks like a miniature house, while the second is a perimeter wall that encloses extra rooms and patios (+ slideshow).

Designed by Japanese firm Y+M Design Office, the two-storey family home is located on a city-edge site in the shadow of Mount Bizan, a mountain named after its resemblance to an eyebrow. 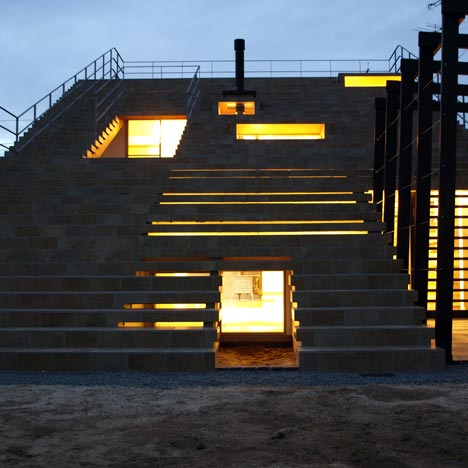 The residence, known as Backstage House, is likened by the architects to a theatre, with the central living room acting as the stage and additional rooms providing the behind-the-scenes areas.

The building's central structure looks more like a standard house, with a gabled roof and traditional windows. This is surrounded on all four sides by a wooden wall that features both curving and angular profiles.

The central living room is a double-height space, but other rooms are stacked up on two levels, interspersed amongst the open-air terraces.

"We set the big wall to cover all the client's site, so that we can utilise the area of the site and keep the family's privacy, not only inside the house but also outside in the garden," said the design team.

"The living room is like a stage for play because it is enclosed by cedar, and it has an organic and warm style," said the team.

"On the other hand, rooms such as the bedroom, entrance and garden are like the backstage areas because they are enclosed by corrugated panels, with an inorganic and cool style," they added.

The dining area and kitchen are positioned in the south-west corner of the ground floor. Three bedrooms are housed upstairs and a small study can be found alongside the entrance.

Numerous doorways and windows connect every room with the living room. There is even a ladder against a wall, offering an alternative route upstairs.

Floor-to-ceiling glazing allows rooms to open out to the two patios. By contrast, small arched windows offer framed vistas of the surrounding neighbourhood and nearby mountain, while a larger arch creates a driveway.

Photography is by Nacasa and Partners.