Located on the beach of the English seaside town, Beach Hut in the Style of Nicholas Hawksmoor was designed as an homage to the architectural vocabulary of the Baroque architect. 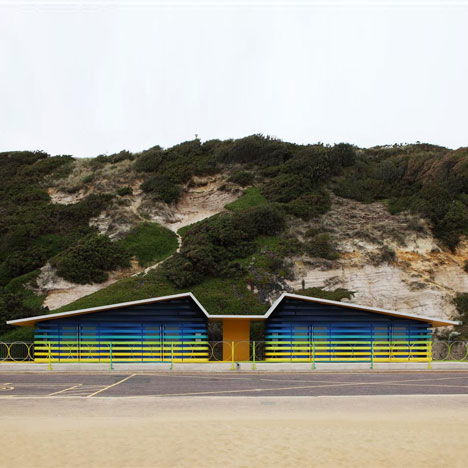 Bronstein, who was born in Buenos Aires, chose this particular style to fill a gap in Folkestone's architectural history, which he says includes only buildings from the late 18th and early 19th centuries, up until the present day.

"Essentially it is a monument made of wood that evokes various other periods in architectural history," explained the artist in a video interview.

"If you look back at the history of architecture and you think that there are certain buildings that should have been built but weren't, or certain sorts of building that would have been fun if they had been around but weren't," he said.

"One of these is the lighthouse, which really wasn't around during the early 18th century."

Positioned alongside the colourful beach huts that are typical of English beaches, the grey-painted structure features a bright red door, yet visitors aren't able to go inside.

The structure was built using a steel frame construction a marine plywood. It is the artist's first major public sculpture in the UK.

The Folkestone Triennial runs from 30 August to 2 November and also features work by Yoko Ono, Andy Goldsworthy and Krijn de Koning, who will present his labyrinthine Dwelling installation in a new location.

Main image is by Thierry Bal. Other photography is by Stuart Wilson.