Brooklyn artist Ted Lawson hooked himself up to a robotic painting machine that used his blood as ink to draw a nude portrait of himself (+ movie).

As part of a series of artworks made using Computer Numerically Controlled (CNC) machines – originally programmed to paint with a self-filling brush and ink device – Ted Lawson decided to hack the device to use his own blood, which led to the notion of a self-portrait. 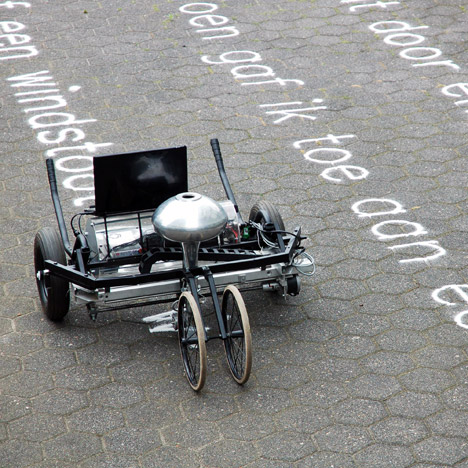 "I don't really like being the physical subject of my own work and was not particularly thrilled to pose nude, but the purest execution of the concept demanded it," he told Dezeen. "The idea of connecting the self directly to the machine and then making that connection to the other works in the show was important to me."

To make the Drawing Blood project as relevant as possible to a wide audience, the artist wanted to play on the popular craze for taking photos of oneself with a mobile phone camera.

"By creating a self portrait, the work references other culturally symbolic ideas to do with narcissism and inward thinking – the essence of the "selfie", which is clearly having its moment," Lawson said.

The image started as a photograph, which was initially translated into a bitmap image and then a more complex vector-based artwork.

This in turn was turned into the "g-code" that runs the CNC machine, dictating the speed and direction of the brush's movement.

“There was a lot of trial and error to get this process to work because at every step, subtle tweaks drastically alter the final result and can really make a difference between the level of realism or abstraction in the final work," said the artist.

"I spent a lot of time just developing a way to vacuum the paper to the table so it would stay perfectly flat and not curl up as the blood saturated the paper."

Once the machine was in motion, Lawson continued to make adjustments – sometimes altering the numerical input but often manually adjusting the brush with a pair of tweezers.

"I allow for errors and glitches to be part of the drawing. The random events make a deeper connection between the code used by the computer and the machine and the much more organic code that is present in blood and DNA and everything else," he told Dezeen.

The process took several hours to complete and Lawson had to drink fruit juice and eat biscuits to maintain hydration and sugar levels. "It uses a significant amount of blood, but clearly not enough to kill me," he explained. "I have not passed out yet."

The piece has received mixed reactions, but Lawson says that's part of what he is trying to achieve.

"Many people have had a very strong reaction to the work in both positive and negative ways, which I think is to be expected when using a medium as loaded as blood," he said. "This is definitely a work made for the internet age and the biggest benefit is getting to see those comments unfold as they are happening wherever photos of the drawings are posted."

The artwork is part of a series called The Map Is Not The Territory, which explores the way we perceive reality by abstracting or mapping it, and the role that technology plays in that process. The whole series will appear in a solo exhibition at Joseph Gross Gallery in New York from 11 September to 4 October.