The most private rooms of this house by Japanese studio Airhouse Design Office are concealed within massive columns, leaving the surrounding double-height space to become an area for socialising (+ slideshow).

Named House in Ohno, the two-storey residence is located amongst an orchard of persimmon trees –  known in Japan as kaki – within a residential area of Gifu Prefecture.

Keiichi Kiriyama, the principal architect at Airhouse Design Office, planned an interior where private rooms such as bedrooms could be hidden in the corners and centre of the plan, allowing large expanses of glazing around the spaces in between. 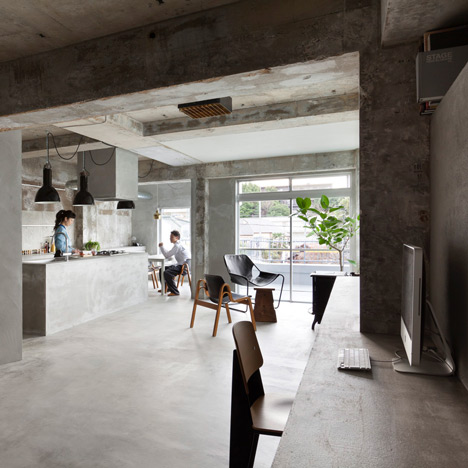 "As the landscape transforms with the changing of the kaki seasons, a generous living space is produced in the house nestled among the kaki trees," said the architect.

The building has a simple rectilinear form, with a pyramid hip roof that sits on top like a large hat. The edges of the roof overhang the walls to offer some shelter from the rain, terminating at a seemingly paper-thin edge.

Floor-to-ceiling glazing features on all three of the four elevations. There is also a large sheltered terrace at the front of the building that offers a transitional space between inside and outside.

"As the client wanted wide open spaces with high ceilings, a structure composed of a large roof set on top of seven thick columns was used," said Kiriyama, whose past projects include a raw concrete apartment and a converted warehouse residence.

"With this composition, only the sky and the kaki orchard are visible from the inside, giving the area an open feeling while the kaki trees provide a sense of privacy from the outside world, all of which makes for a relaxed atmosphere in the interior areas," he said.

The seven columnar structures are dotted around the interior, differing in shape and size. Each one contains two storeys, and the upper levels can be accessed by using either a staircase or a ladder.

The largest of the columns accommodates a traditional Japanese-style room at the bottom with a master bedroom on top.

The two at the back of the house accommodate the family bathroom and a series of children's rooms, while the remaining four house a small study room, a pantry and other storage areas.

The surrounding leftover space is divided up to create a living room, a dining area and a kitchen featuring clean white surfaces and plywood fittings.

Wooden floors run throughout the space, complementing the pale grey-blue colour used for the walls and the translucent white curtain that separates the living area from the front terrace.

Bare light bulbs hang low to illuminate the most frequently used areas. Other details include wooden shelves and cabinets that run around the corners of the walls.