Detroit studio Rootoftwo has installed weather vanes shaped like headless chickens on five buildings in Folkestone, England, which spin around and change colour in response to fear levels on the internet rather than the climate (+ slideshow).

Created as part of the ongoing Folkestone Triennial, the Whithervanes were designed by Rootoftwo to subvert the traditional weather vanes used by farmers to track the direction of the prevailing weather, by transforming them into devices that react to activity in online news feeds. 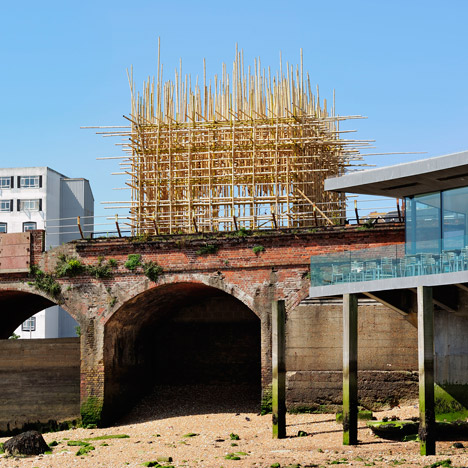 "We wanted to make weather vanes for the information age – devices that indicate the rhythm of news information and make us aware of our ability to make decisions in spite of it," said designers John Marshall and Cezanne Charles.

Whereas standard weather vanes are often shaped like cockerels crowing, with letters indicating the points of the compass, the Whithervanes are shaped like four-foot-tall headless chickens, made from polyurethane foam and coated in polyester resin.

"If you look at a traditional weather vane it has the cardinal directions of North, East, South, and West on it – from the right perspective it spells out N-E-W-S," the designers pointed out.

"Our Whithervanes are a Neurotic-Early-Worrying-System that questions where we are going, since collectively we seem to be running around like headless chickens," they said.

Each of the Whithervanes is controlled by a Raspberry Pi miniature computer that gathers reports uploaded to the internet from around the world by international news agency Reuters.

The news reports are scanned for keywords used by the Department of Homeland Security to identify possible terror threats on social media. The computer then establishes the GPS coordinates of the event and its direction and distance from Folkestone.

The chickens rotate to face away from the source of the story, while coloured lighting and the number of spins they make corresponds to the five threat levels used by the American National Terrorism Advisory System.

Also included in the keywords are threats suggested during workshops with residents of the town, which ranged from race riots and gastro-tourists to unemployment and dog poo.

Other factors affecting the behaviour of the Whithervanes include marketing data used for targeting junk mail in the specific neighbourhoods where the chickens are located, which elevates the importance of events likely to affect that area.

Tweeting dedicated hashtags or clicking a button on the project's website enables the public to interact with the artwork, either raising or reducing the current fear level.

"The chickens are like a blinking light on the dashboard of your car – they are there to let you know that something, somewhere is not quite as it should be and it needs your attention," said the designers, who plan to make the system available next year as an open-source kit that can be adapted for different locations and types of data.

Other installations created for the Folkestone Triennial include a three-dimensional bamboo lattice on top of a railway viaduct and a colourful combined lighthouse and beach hut. The event is ongoing until 2 November.