Visitors to the Folkestone Triennial opening this weekend are invited to climb inside a three-dimensional bamboo lattice built by Dutch artist Gabriel Lester over a harbour railway viaduct (+ slideshow).

Named the Electrified Line, the large bamboo structure was designed by Gabriel Lester to mark the point where the disused railway line leaves the land and extends out over the coastline of the British seaside town. 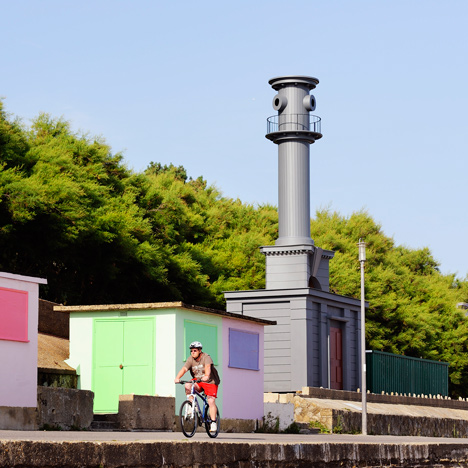 It is intended to open up a discussion over the potential future of the redundant structure.

Lester, who is based in Amsterdam, has spent the last three years living and working in China. This prompted him to choose bamboo for the framework of the installation, which will remain in place for the two-month duration of the arts festival.

"When I thought about how to somehow create something that makes people aware of this site, I thought it would be best to use a material that is foreign or alien to Folkestone," the artist told Dezeen.

"I thought it would be interesting to bring something foreign, literally, and to have people think about the site – the potential for the future and maybe also what happened in the past," he said.

The base of the structure is built from timber. It comprises a staggered series of steps that double as a seating area, and an elevated platform offering visitors a view out over the harbour.

The bamboo lattice surrounds the platform in a seemingly random arrangement that Lester compares to a musical score.

"There's this element of stacking and arranging things, much like you would to create a music composition or, on the other hand, maybe the way you would arrange flowers or a landscape," he told Dezeen.

"I wanted it to look like a pulse, like a moment of energy," he added. "It's as if an energy has been frozen and then becomes an architectural shape."

Photography is by the artist, apart from where otherwise indicated.

Read on for the full interview with Gabriel Lester:

Amy Frearson: What were the ideas behind the piece?

Gabriel Lester: Well a lot of my work is, to a certain degree, about trying to think about how you use space, how objects or volumes are subject to time, or how we experience them as we view them or walk around or stand inside them. This is almost the way you would construct a narrative. When people speak about narratives they think that usually means that there is a plot, but if you think of a symphony there's no plot, but there is a narrative experience.

The piece in Folkestone in a way combined these interests that I've been playing with for the past 20 years or so, trying to create a work which is always subject to time, to different kinds of stages – being in it, looking from it, or being seen inside it – so it is a kind of image.

With these bamboo poles, it's not just a bunch of walls, it's actually pieced together out of many small pieces. So there's also this element of stacking and arranging things, much like you would to create a music composition or the way you would arrange flowers or a landscape.

Amy Frearson: Why did you choose bamboo?

Gabriel Lester: I've been working and living in China for the past three years. When the director of the Folkestone Triennial asked me to come up with a piece, he asked me to consider a way to make people more aware of an old train track on this site by the harbour, the last little stretch before it crosses where the ferry used to depart.

When I thought how to activate this, and when I thought about how to somehow create something that makes people aware of this site, I thought it would be best to use a material that is foreign or alien to Folkestone. It's very much bricks and plywood and a typical collection of British town materials, so I thought something alien or different would immediately become highlighted.

Amy Frearson: Did you plan the arrangement beforehand, or did you work it out as you went along?

Gabriel Lester: It's pretty much exactly the same as I showed in the renders. It's supposed to be like a voice or music, and I wanted it to look like a pulse, like a moment of energy, as if one pulse controls the sound or an earthquake or a movement. It's as if an energy has been frozen and then becomes an architectural shape, if that makes sense.

Amy Frearson: How have the public reacted to it?

Gabriel Lester: I've been on-site quite a bit. I wanted to be there when we did the final construction, because although it was sketched and planned you still need to be on-site to make it look good.

There was a lot of curiosity and I guess British people are inquisitive to other cultures, so there were many people that approached me asking what it's for, what it's meant to be, and so on and so forth. I thoroughly enjoyed the amount of people that were sincerely curious and interested to find out what it was.

After the structure was finalised, it became this form that allowed people to climb up the stairs and arrive at this observation deck, and then either look to the horizon and see the harbour, or look down the track. When you're there there's this kind of atmosphere. It's not just about arriving at a higher point, it's not just entering a space or entering a kind of architectural shape, but it's also entering a mood. It's the kind of thing that makes people feel a little bit lighter. You see more smiles and people seem to be in a kind of marvelling state of awe.