News: Norman Foster has hit back at the London city officials that have ruled out his proposal to build a new airport on the Thames estuary, claiming that the decision lacked "courage".

The independent panel tasked with deciding where to build new airport runways around the British capital today revealed their three-strong shortlist of development options – which doesn't include the east London airport conceived by Foster + Partners and backed by London mayor Boris Johnson. 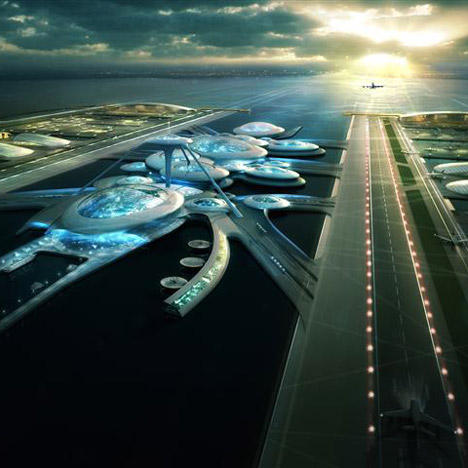 Architect Norman Foster, who has completed airports in Jordan and Beijing, as well as London Stansted, has blasted the commission for not having "even the courage to further explore – to study – to research – a strategic long term alternative to the instant gratification of a sadly predictable compromise".

With the option of the Thames Hub now off the table, London's future airport options now include adding a third runway or lengthening an existing runway at Heathrow airport, or adding a new runway at Gatwick airport.

"Adding a third runway at Heathrow is merely a short term fix," said Foster. "It will inevitably lead to a fourth runway in order to maintain international hub status."

Foster's vision is for a four-runway airport on the Isle of Grain, featuring a new flood barrier crossing the estuary, a freight port and an Orbital Rail link around London, connected to the north of Britain and Europe.

"A new national airport in the Thames Estuary is a true design for the future, especially when linked into existing and new high speed train networks. It can be achieved more quickly and, based on independent analysis, there would not be a substantial cost difference between a fresh start at Thames Hub compared to a stop-gap solution at Heathrow," he said.

The Gherkin designer cites France and Hong Kong as cities where "relocating an airport that no longer serves its purpose" has been successful in the past.

"The pattern of the most competitive emerging economies is to replace the old and obsolescent and go boldly forward with the new, an opportunity today's decision denies this country," he explained.

Boris Johnson also accused the panel of turning its back on the city's rapidly growing population by rejecting the airport, which could serve up to 150 million passengers each year.

He described the two Heathrow options shortlisted by the panel as "political Kryptonite" and "an environmental disaster for London".

"In one myopic stroke the Airports Commission has set the debate back by half a century," said Johnson, branding the east London airport as "the only credible solution".

"Any process that fails to include it renders itself pretty much irrelevant, and I'm absolutely certain that it is the option that will eventually be chosen," he said. He confirmed his team will continue to make the case for an airport on the estuary, despite the ruling.