Stockholm designer David Taylor has combined brushed aluminium and polished brass with waste material found on the site of a former iron foundry to create a series of candle holders.

The slag – a bi-product of the smelting or refining of metal ore – is left in its raw blue-black state and attached to metal components using soldering, bolts and glue to create the candlesticks.

"The material is used pretty much as it is found," David Taylor told Dezeen. "I wash away the residue of decades, perhaps centuries, in the ground to reveal a vibrant blue-green clump of glass-like rock and it’s ready for use." 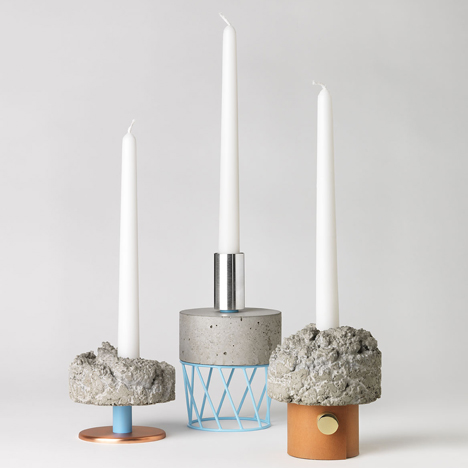 The irregular shape of the slag is juxtaposed with uniform brass cylinders and aluminium cubes.

"Contrasting the rough haphazard aspect of the slag with refined materials such as brushed aluminium and polished brass brings a level of sophistication to what is essentially an unwanted waste product," said Taylor.

"Brushed aluminium is so cool and polished brass so warm, which creates a tension when you bring the pieces together."

The slag is commonplace in the forest surrounding the Swedish village of Hälleförsnäs, which from the 1600s until 2006 was home to a working iron foundry.

"Slag is such a beautiful material and it's just lying around on the forest floor, when you pick it up, it's natural to want to use it in some way, like finding treasure," said the designer.

His Slag collection currently includes a range of candlesticks, but more tabletop objects are in development and will be launched in early 2015.

Taylor's previous projects include the individually named Crowd Candlesticks, such as Angela, Sid and Kevin, as well as Silver, a pair of candlesticks each made of three silver tubes clamped together by a found plastic component to form a tripod.

Photography is by Mats Håkanson, unless otherwise stated.