Wilcox's piece for the exhibition is based on the idea that, in a future of fully automated, computer-controlled vehicles, traffic collisions will be a thing of the past. 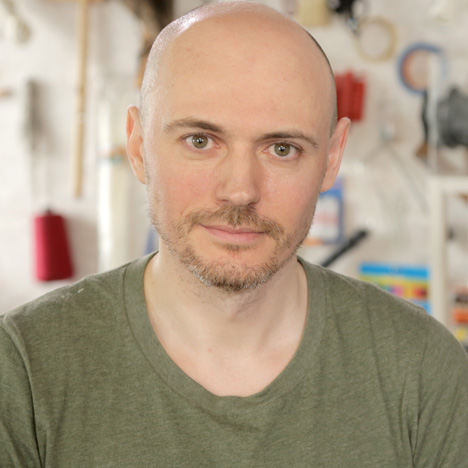 Dominic Wilcox to build driverless car made out of stained glass

This, he suggests, will give car designers total freedom of form and material.

As an example of the kind of vehicles we might be travelling in one day, Wilcox is building a stained-glass car with a bed inside, which people can relax in as they are transported to wherever they need to go.

The shell of Wilcox's car is being made by soldering pieces of cut glass onto a wooden frame.

"We're using the 'copper foil' technique, which is the same way they make Tiffany lamps," he explains. "It's a really meticulous process and there's a lot of improvisation going on."

Wilcox enlisted the help of Middlesex University's product design department to make the wooden frame that supports the glass.

"It's made on a CNC machine, which cuts out various arches that then slot together to form the structure," says Wilcox. "It is very much like the way they used to make aeroplanes."

Once the shell is finished, Wilcox will take it back to Middlesex University to attach it to the chassis and wheels, which are ten inches in diameter, like those on the original MINI.

The painstaking process of making the car hasn't gone completely to plan, Wilcox says, and he has had to improvise and adapt throughout.

"I drew the shape of the car and I put it onto a computer but until you actually get your hands dirty, cutting this glass and soldering, all sorts of things happen," he says. "So it's an adventure."