The designers at Anderssen & Voll put their own spin on the 2002 Bombo stool by Stefano Giovannoni, which incorporated a gas-lift system to move the seat up and down. 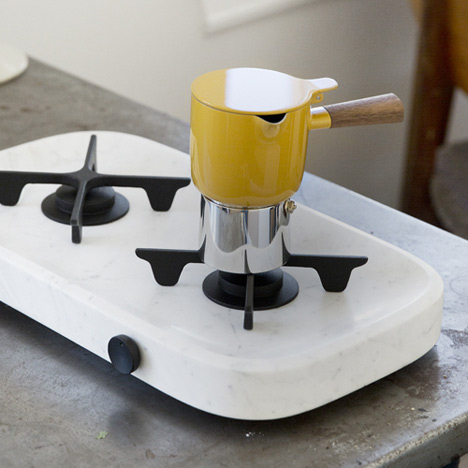 The stool was considered so futuristic that it appeared in TV series Star Trek and film Lost in Space.

The new Tibu gas-lift barstool features two discs forming the base and seat, connected by a perpendicular pole.

A small section branches off to create a footrest, made from the same tubular steel.

The profile is kept simple using a release button for the gas lift that is integrated into the underside of the seat.

"One of our approaches is to emphasise the main feature of the product and express this in a clear physical representation: this is what I am and this is what I will do for you," the designers told Dezeen.

"We have been very motivated by showing the possibility for movement - adjusting the stool up and down. This led to the organic, continuous, flowing language of the stool," they said.

The designers were keen to maintain one consistent colour across the piece despite the challenges presented by textural variation across the multiple materials.

"Colour is important in uniting the piece and supporting the story. In this we were giving each part of the product the same importance," they explained.

The seat is upholstered in Kvadrat's Steelcut wool textile, the colour of which is matched to the steel parts with the help of a car painter.

"Colour on a textured surface behaves very differently to colour on a smooth surface and the two can be tricky to match," the designers explained. "In the end we had to leave all standard colour charts like NCS or RAL, and get the help of a local Veneto car painter to get the colour matching just right."

The final outcome was less serious and masculine than the team intended: "Even we as designers we were a little bit surprised by how playful, sculpted and soft it turned out in the end, given the sternness and simplicity of the design."

"We hope the audience will see Tibu as a fresh reinterpretation of this product category introduced by Magis themselves with Giovannoni's Bombo," the designers added.

The Tibu stool will be on display as part of the 100% Norway exhibition at Tent London, which takes place from 18 to 21 September during the London Design Festival.