The architects were engaged by a pair of university professors to improve the internal layout and the thermal efficiency of their home in a 19th century neighbourhood near the city centre. 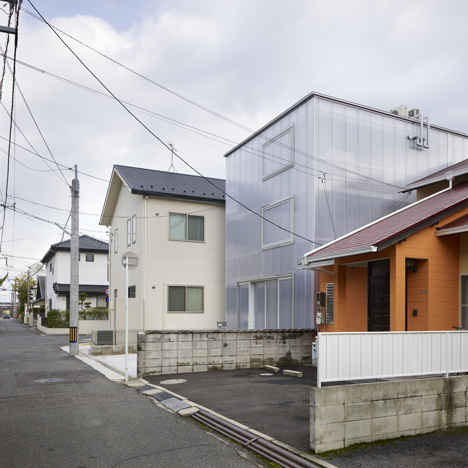 "The main task of the renovation was to create a sort of new, second dress for the house that would allow significant improvements to its thermal insulation," Manfredo di Robilant told Dezeen.

The original structure and proportions of the 19th century building were retained but plastic sheets have replaced aluminium cladding and tar roof tiles added in the 1970s, giving the project its title, Polycarbonate House.

"On the utilitarian side, polycarbonate panels were chosen because they are light, which is crucial with a thin structure, and have good insulating properties," said Di Robilant.

"On the aesthetic side, they are semi-transparent so they allow you to see the inner layer of the house as well as the structure."

The polycarbonate surfaces produce reflections that alter depending on the viewing angle and change throughout the day with the lighting conditions.

Behind this thin surface is an additional layer of rigid insulating panels that helps to support the damaged existing structure. Air is able to flow through the gap between the two surfaces, reducing the reliance on air conditioning in summer.

One of the street-facing corners has been opened up with tall windows that are concealed behind mobile aluminium shutters.

The shutters incorporate louvers that prevent views into the house while allowing light to reach the interior.

Wheels fitted to the base of the panels glide along tracks installed on the concrete plinth to allow them to slide aside and reveal the windows behind.

An entrance at the side of the building opens into a bright double-height atrium behind the glazed corner where a mezzanine provides a view up through the building.

A large bookshelf lining one wall of the main space unites the living area on the ground floor with an office on the mezzanine.

The staircase, window frames and railings are made from mahogany, which adds a warm tone in contrast to the industrial plastic and aluminium exterior.

Photography is by Paolo Rosselli unless otherwise stated.