Maison&Objet 2014: Oslo designer Hallgeir Homstvedt has created an oversized candle holder, intended to be moved around the home, for Danish brand Menu.

Hallgeir Homstvedt's Chamberlight is made of two parts, a cast anodised aluminium base with a small handle to encourage the user to carry it with them, and a bulbous mould-blown Pyrex glass surround. It can be used with tea lights, block candles and oil lights, and is suitable for both indoor and outdoor use. 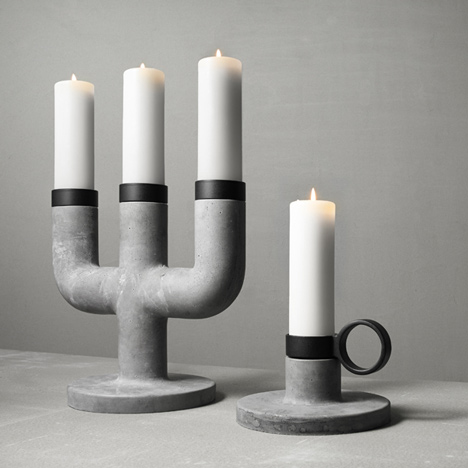 Weight Here by KiBiSi for Menu

Homstvedt originally set out to design a modern version of the classic kerosene lamp with glass chimney and brass tray, but simplified the concept to a two-element candle holder due to safety concerns over the use of kerosene.

"The final design is a hurricane lamp that has a contemporary feel, with clear references to classic candle holders and oil lamps," said the designer. "My approach is to simplify the final design as much as possible. I strive to create products that have a timeless feel but are inspired by their time."

The base was originally intended to be made from cast iron, but eventually aluminium was selected due to the precision it enables and to make the light easier to handle. Pyrex glass was chosen for the bulb to achieve a precise form free from bubbles that would be lightweight and resilient to changes in temperature. The glass diffuser is available in clear and smoky versions.

"The lamp is in a category between a candle and a electrical table lamp, which I find very interesting," Hallgeir told Dezeen. "I hope people see it as a versatile light that can be moved around to create a good atmosphere wherever you are."

The Chamberlight was launched by Menu at the Maison&Objet trade fair in Paris last week. Hallgeir's previous projects include the Pal Stool, held up by curved legs inspired by skateboards, and Tangent Vases, which are attached to a metal tray by strong magnets.