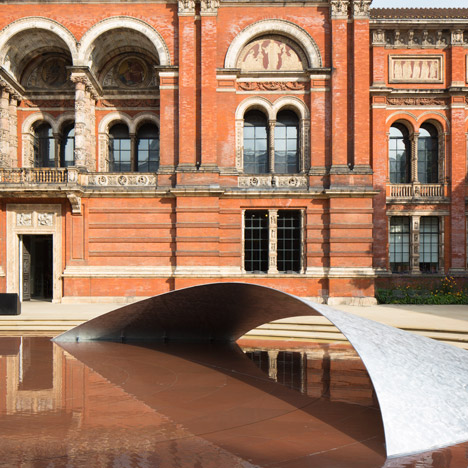 The rotating wheel is suspended off the ground and moves constantly in a clockwise direction, powered by a motor.

Its surface is made from superluminova, the material that makes watch faces luminesce.

Over 700 LEDs housed in a vertical element in front of the wheel charge the superluminova to make it glow.

As the wheel spins, the glowing sections fade gradually until they return to the charging point.

The LEDs are programmed to switch on and off at various times, creating different patterns that slowly spread across the disk.

The luminous effect is made more effective by the location; the gallery is one of the museum's darkest spaces due to the light sensitivity of the textiles. "It's a very quite, peaceful space," Montgomery told Dezeen.

The motor is hidden within the structure, which sits in the middle of the gallery and was created to be viewed from all angles.

"The design of the back is just as important as what happens on the front," said Montgomery. "We spent a long time detailing how we could make the machine look and feel like a designed object."

A metal stand supports the vertical disk, designed to be as simple as possible.

"To create this wheel we knew it had to be a fairly mechanical object, but we didn't want that aesthetic to take over," said Montgomery. "The technology doesn't get in the way."

The V&A is also hosting installations by Zaha Hadid and Barber and Osgerby as the hub venue for this year's London Design Festival, which continues until 21 September.